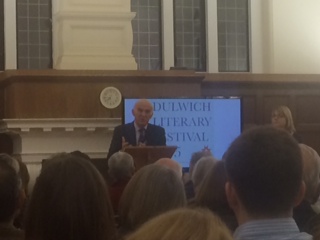 Opening the Dulwich Literary Festival at Dulwich College’s Old Library, Vince Cable was in fine form and appeared totally at ease with his surprise defeat in May’s general election, when he lost his Twickenham seat after 18 years.

Without betraying any bitterness, Cable said his former Conservative partners in the coalition government were “very good at slaughtering people.” Cable’s Liberal Democrats proved the chief whipping boys in that general election, collapsing to a rump of eight seats in the House of Commons.

Using a medical analogy throughout to describe the events chronicled in his book “After The Storm,” the former Business Secretary described the 2008 global financial crisis as the “economic equivalent of a heart attack.” And though the patient is faring better, he or she, is “still connected to life support.” That’s clear in the fact that interest rates are apparently “lower than at any time since the Babylonians.” That’s a broad sweep of history and humour that the new Parliament is missing.

Cable conceded that he and his Liberal Democrat colleagues in the government had failed to argue against the Tory charge that the crash was primarily the fault of the previous Labour government and its then Chancellor-cum-Prime Minister Gordon Brown, a man Cable famously lampooned as having turned from Stalin to Mr. Bean.

“We lost that one,” he told arounddulwich.co.uk.

“The whole debate has become very polarized in quite a juvenile way,” he added.

Cable charged his former partner in government George Osborne of cutting spending “much more severely than is actually required” and that the Labour Party under Jeremy Corbyn would be “unelectable.” He would say that, wouldn’t he? But still, it’s a point.

Cable gave few indications that he would be looking to make any return to Parliament and said he’d refused an offer for a peerage.

What’s he doing then? Well apart from writing this well-received chronicle of the past few years of economic crisis, Cable is half-way through a novel that appears to be mostly set in India. His biggest difficulty apparently how to get the twangs of his Glaswegian protagonist and his Bombay hosts through on paper.

Not a bad way then to spend a Friday evening and everyone left feeling, no doubt, that Cable’s defeat at the hands of the great and the good of Twickenham has deprived politics in this country one of its most civilizing voices.

There are further events at the Dulwich Literary Festival this weekend, including talks from Melvyn Bragg, Huw Edwards and Helen Lederer.

Book now! And go buy your stocking fillers at dulwichbooks.co.uk

Vince Cable’s ‘After the Storm – The World Economy & Britain’s Economic Future’ is published by Atlantic Books and is available at all good book shops, including Dulwich Books.

Pan Pylas is a correspondent at The Associated Press and a long-time resident of Dulwich. @panpylas