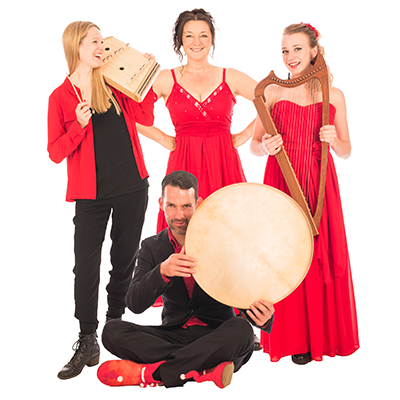 The Joglaresa medieval ensemble will be lending their unique take on traditional music to this year’s Dulwich Festival.

Directed by Belinda Sykes, this London-based ensemble has been playing together since 1992. Now well-established, they are particularly interesting for the way in which they imaginatively push, and often transcend, the limits of what is often thought of as early music.

So, have they ever encountered any opposition to their fresh approach to interpretation? ‘We know that each approach to the performance of medieval music will touch someone in some way and that all are valid,’ said Belinda, adding, ‘the difficulty for us arises when claims are made and accepted that one approach is more valid than another.’

Their work focuses on connecting ancient and traditional musics but, rather than create a ‘fusion’ or a surreal mix of these styles, they aim to use their combined experiences (upbringings drenched in traditional Irish, English, Maghrebi, Balkan and Middle Eastern music) to create a homogenous sound – Joglaresa members spent years in North Africa and the Middle East absorbing the best traditional tunes, learning the local languages (Arabic and Hebrew).

Sykes believes there should be a healthy diversity of interpretative approaches: ‘I have just as little historical information as anyone to go on when it comes to interpreting medieval music. But at least I follow a different line. I think Joglaresa’s liberated approach scares people who regard the written text as prescriptive rather than descriptive. We’re not afraid to improvise. Perhaps other performers feel threatened because they are used to following notes on a page. We don’t intend to attack or threaten anyone, it’s just our way of performing.’

Joglaresa have performed their music all over the world and if you’d like to see them when they come to the Dulwich Festival, they perform at Christ’s Chapel on Wednesday 11thMay at 7.30pm.