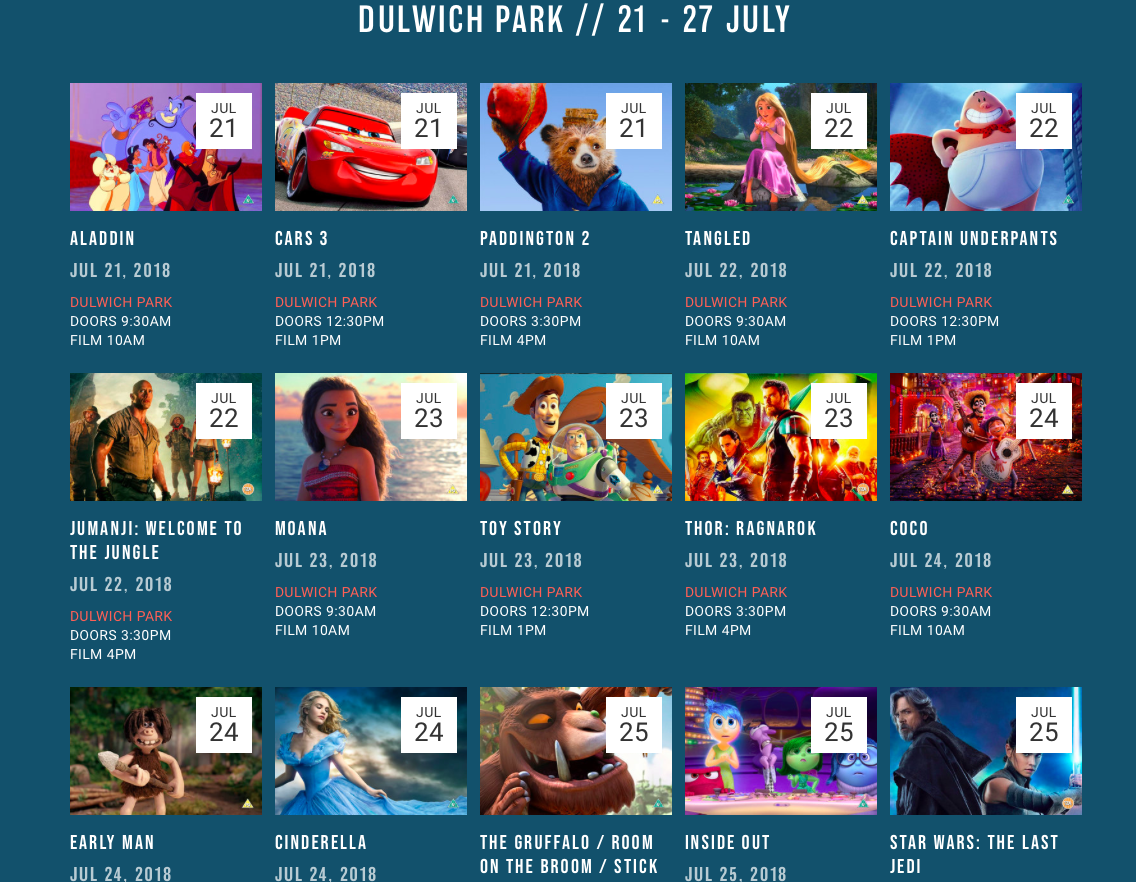 The Luna Cinema launches BRAND NEW outdoor cinema for kids running from July to September in six venues across the country. The programme includes screenings of family-friendly classics such as The Lion King and Aladdin, alongside this year’s blockbusters including Paddington 2, Spider-Man: Homecoming as well as musical phenomenon The Greatest Showman. Newly added to the Luna Kids schedule, the first ever outdoor screenings of The Gruffalo, Room on the Broom and Stick Man. Luna Kids will utilise the highest definition outdoor screen in the country, meaning a crystal-clear picture even in full daylight.

Going to the cinema with young children can be stressful; getting little people to sit still for over an hour, negotiating constant snack and toilet breaks whilst also trying to stay quiet can be tough. That is why this year the UK’s leading open air cinema company The Luna Cinema is launching Luna Kids Cinema, the UK’s first and only open-air cinema experience designed specifically for families and children of all ages.

Over the summer holidays from 21st July, parents and kids can enjoy a fun cinema experience together in the fresh air and summer sunshine. Families can take their pick from nearly 100 screenings across the UK, including new blockbusters and award-winners, such as The Greatest Showman Sing-along and Early Man to classics such as Toy Story and Harry Potter. Other highlights and family-favourites include Coco, Star Wars: The Last Jedi, and Despicable Me 3.

For the first time on an open-air screen, Luna Kids Cinema will be presenting multi-award winning ‘The Gruffalo’, ‘Room on the Broom’ and ‘Stick Man’ – the phenomenally popular animated films based on the classic picture books by Julia Donaldson and Axel Scheffler. At a running time of half an hour for each of the three titles, it means cinema revellers with younger children can enjoy shorter bursts of entertainment together at a single screening in the sun.

With tickets starting at £12.50 for adults and £7.50 for kids, films will be screened during the day on a giant 10 metre, high-definition screen that allows for a perfect picture even in direct sunlight. Luna Kids locations include some of the country’s most beautiful and historic sites, such as Hampton Court Palace, Hatfield House in Hertfordshire, Dulwich Park in London, Tatton Park in Cheshire, Heaton Park in Manchester and Priory Park in Surrey.

George Wood, founder of The Luna Cinema, said: “We’re so excited to be launching Luna Kids Cinema. This year marks The Luna Cinema’s 10th anniversary, and over that decade we’ve learnt that the key to fantastic outdoor cinema is the unique experience of watching your favourite films in the company of other film fans. It’s that shared experience that makes it so memorable, and that is true whether you’re aged 5 or 85. Luna Kids will celebrate all that is great about cinema for kids of all ages – this last year has been so fantastic for kids’ films, with pictures like Paddington 2, Coco and Despicable Me 3 topping box office charts and delighting adults and children alike. To experience these films, alongside timeless classics such as Aladdin, Up and The Incredibles, on a giant high definition screen will make for a truly unique summer family outing. Traditionally outdoor cinema has to take place after-dark to allow for projectors to achieve suitable picture quality, but this has made it a less practical option for families with young children, but with the advancement in LED technology we now feel that the solution is here. No one wants to be cooped up in a darkened room during the summer holidays – Luna Kids encourages us all to get out in the open air and enjoy some of the most stunning parks and historic sites in the country.”

Daryl Shute, Brand Director, from Magic Light Pictures, the Oscar-nominated, and BAFTA winning producers of family entertainment and brands, including The Gruffalo, Room on the Broom and Stick Man, said: “We can’t wait to see the Gruffalo’s terrible tusks, terrible claws and terrible teeth in his terrible jaws come to life on the big screen at Luna Kids Cinema! Children and families love these characters and stories and it will be the first time our films have featured at an open-air cinema festival.”

Luna Kids Cinema audiences are welcome to bring along picnics to the screenings. However, all events will have a fantastic selection of healthy food and drink options tailored to all tastes – as well as a Big Kids Bar serving refreshments for older film fans, including wine, beer and prosecco.

To book tickets, and for more information, please visit www.lunakidscinema.com