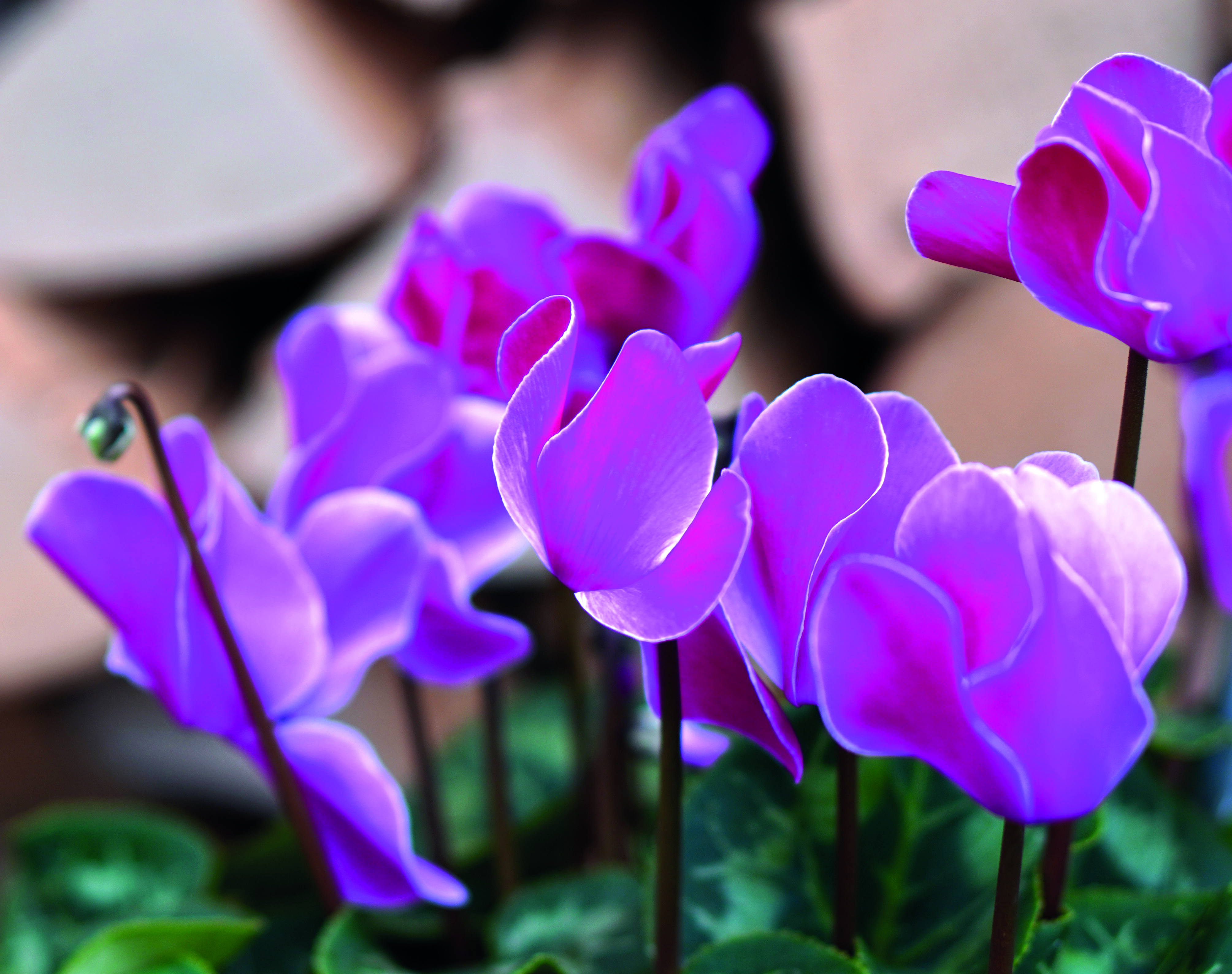 For winter colour and interest, you can’t beat the hardy cyclamen. These little gems will brighten up the darker months with a sprinkling of pink and white. They die back and lie dormant in warm weather, popping up again when temperatures drop. Despite their dainty appearance, they flower away through frost and snow and when happy will eventually self-seed and spread around, carpeting shady spots.

Flowering from late December, Cyclamen coum flowers are a sign that a fresh New Year is on its way. The rounded, dark green leaves with white or silver markings appear first, so they’ll already have been growing from October. These tiny cyclamen look wonderful en mass, and are perfect for naturalising around the base of deciduous trees and are gorgeous with snowdrops, crocuses and other shade lovers such as ferns.

The flowers of Cyclamen coum tend to be magenta pink, but come in a range of pinks to pure white. For something more unusual try varieties such as C. coum ‘The ‘Pewter Group’ which have a silvery coating on the leaves or C. coum ‘Ashwood Snowflake’ with pure white flowers. These cyclamen like partial shade and humus-rich, well drained soil so dig in grit or leaf mould if you have heavy soil. Avoid manure as they like poorer soils and this will just produce leaves and no flowers. They also like dappled shade and moisture in autumn through to spring, which is when they grow below ground – long before they emerge.

These cyclamen originate from the Mediterranean and are tougher than C. coum, putting up with drier sunnier conditions such as under shrubs or round tree roots – although they prefer some shade and like free draining, humus rich soil to avoid the tubers drying out in summer.

As with C. coum, they make lovely ground cover and are at their best planted in large groups. They look stunning under planting silver birch trees, or popping up amongst inky black Ophiopogon planiscapus ‘Nigrescens.’ Tempting as it is, avoid planting C. hederifolium and Cyclamen coum together, as the former is more vigorous and will eventually take over.

The larger, showier, non-hardy cyclamen are cultivars of Cyclamen persicum. They’re useful for Christmassy window boxes and containers and come in a range of whites, magentas, reds and deep purples but are generally one-season wonders.