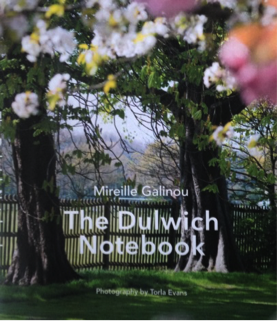 The Dulwich Notebook is a new breed of London guidebook. It does not focus on Central London or tourist spots such as Greenwich; it deliberately highlights one of London’s residential quarters. For some time now the capital’s suburbs have been attracting the interest of academic urban historians but their interesting findings hardly ever reach the people who inhabit these suburbs.

The Dulwich Notebook also challenges the usual assumption that a book about residential London should be about local history: this publication is about Dulwich now and what makes Dulwich such a special place to live. However, we all realise that the present does not exist in a vacuum, so history frequently underpins the contemporary narrative.

The Dulwich Notebook is divided into four chapters which deal with Dulwich Village, West Dulwich, South Dulwich and East Dulwich, each chapter examining topics such as History, Landmarks, Spiritual Life, Culture & Creativity, Contemporary Life, Green Spaces, Movers & Shakers. The Dulwich Notebook is also a book of contrasts: it accommodates the development of schools in the Village alongside rude depictions of dogs and cats; or the controversial presence of ‘street art’ alongside the worthy Old Masters of the Dulwich Picture Gallery; or again the near demolition of the Georgian 105 Dulwich Village now famous for its gorgeous gardens versus the actual demolition of the ‘art house’ in Lordship Lane.

A must-buy for past, present and future residents of Dulwich and for anyone interested in the suburban story. The Dulwich Notebook is a snapshot of life in a London suburb at the beginning of the twenty-first century; in time it will offer historians a taste of the way things were.

The launch of The Dulwich Notebook took place in the Board Room of The Dulwich Estate on 30 September 2015. Its chief executive, John Major, welcomed guests – i.e. everyone who had contributed to the making of this new book about Dulwich past and present. 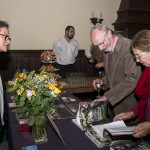 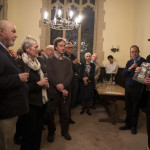 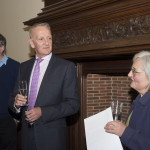 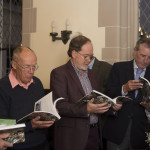 The publication brings together historians, traders and residents who all played a significant part in the making of Dulwich as a modern neighbourhood.

The author, Mireille Galinou, is a London historian – for many years a curator at the Museum of London. Alex Werner, the Head of History Collections at the Museum, greeted the publication of The Dulwich Notebook as something of a landmark.