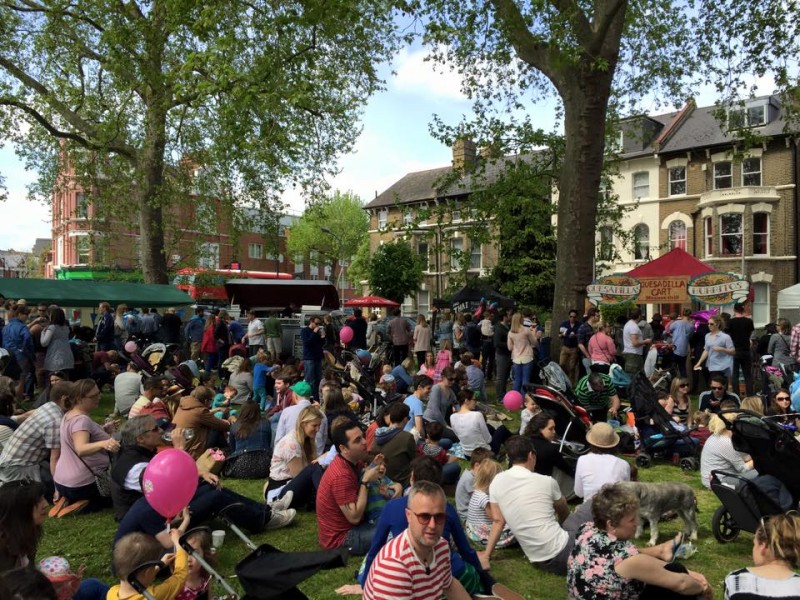 Yesterday marked the 10th annual Dulwich Festival Fair, which attracted more visitors to our sunny Goose Green than ever before!

The Festival Fair is part of the wider Dulwich Festival and celebrates the best craftspeople, designers, independent shops, bars and cafes from East Dulwich and around.

This year, local stallholders were out in full force, including the fab Dolce Vita Catering and its impressive array of cakes, brownies and tarts. Not to be outdone, SE Cakery across the green set up a brownie bar, showcasing gooey chocolate treats in a variety of different flavours.

It was also wonderful to see the Fudge Lady back since her retirement from the Northcross Road market earlier this year. How’s the community going to cope until the next appearance of her delicious home-made fresh Somerset fudge?

It wasn’t just about sweet stuff, you know. The House of Tippler served up fruity summer cocktails, while East Dulwich Tavern hosted a beer and Prosecco tent next to The Goose is Out! stage.

Opening the entertainment on the day was Pepper and Shepherd performing their homespun folk music. Following them was The Wayne Drury Project and Louis van Johnson & The Indi Souls. Up last but certainly not least was local legend, John McClean, who played a mix of folk, blues and soul classics.

Soaking up the alcohol was doubly important on a day when the sun shone throughout. And what a variety there was!

Cooking up a Caribbean feast was Caribbean Queen, serving jerk chicken and vegetables with rice. Also proving very popular was Bose & Bee, whose artisan wood-fired pizzas sold out before the end of the day. Gourmet Farm offered juicy lamb & beef burgers, jumbo pork and venison sausages.  And High Street favourites, Jaflong, was on site serving traditional Indian cuisine; and Grove Vale’s most recent addition, La Scala Coffee House, sold its freshly made paninis. Many other hot food stalls made sure the great and the good of ED did not go hungry.

The East Dulwich WI were spotted yarn bombing the area with knitted bees and flowers to raise awareness for their SOS for Honeybees campaign – prizes were given to every bee returned to the EDWI cake stall.

Magic Shows from The Illusioneer prompted lots of oohs and aaahs from all the family, young and old, but it was the bouncy play dome and inflatable slide that had the kids queuing up for more… and more, and more.

A welcome distraction from the bouncy castles arrived when Green Watch at Peckham Fire Station turned up, complete with shiny red fire engine! Kids excitedly clambered aboard, donned a bright yellow helmet and played at being Fireman Sam for a few minutes – for free!

However, it was down to the exquisite face painting skills of Tumshies that our ordinary village green was transformed into an enchanted garden, overrun with fairies, butterflies and wild animals galore!

As always, there are a host of people who work tirelessly behind the scenes to help make sure the Festival Fair is such a fab event for the community every year.

The brilliant signposts showing where to head for the stalls, donkey rides and face painting were all designed and illustrated by Stephen Shillito, who also had a stall selling typographic cards and prints.  Special mention must go to Murray from Bespoke Windows, who was not only one of the sponsors of the event, but also lent a strong-arm in putting all the signs up.  Other sponsors of the fair include Lila’s Jewels and Push Studios; local Solicitors, Glazer Delmar; Daisylets and their hard to miss pink balloon-filled car; and The Little Clipper who provided children’s haircuts in miniature racing cars!  The SGI-organisation supplied stewards on the day.

But none of it would be possible without Angela Burgess, who runs SE Mags and organises the whole event every year, with fantastic support from a team of volunteers on the day – Philipa, Sarah, Yoko & Stephen.

We can’t wait to see what’s in store for next year!

*****
The Love West Dulwich Fair is on Saturday 16th May from 10am-5pm, and the Dulwich Park Fair is Sunday 17th May from 12-5pm. Details about both can be found on the official Dulwich Festival website