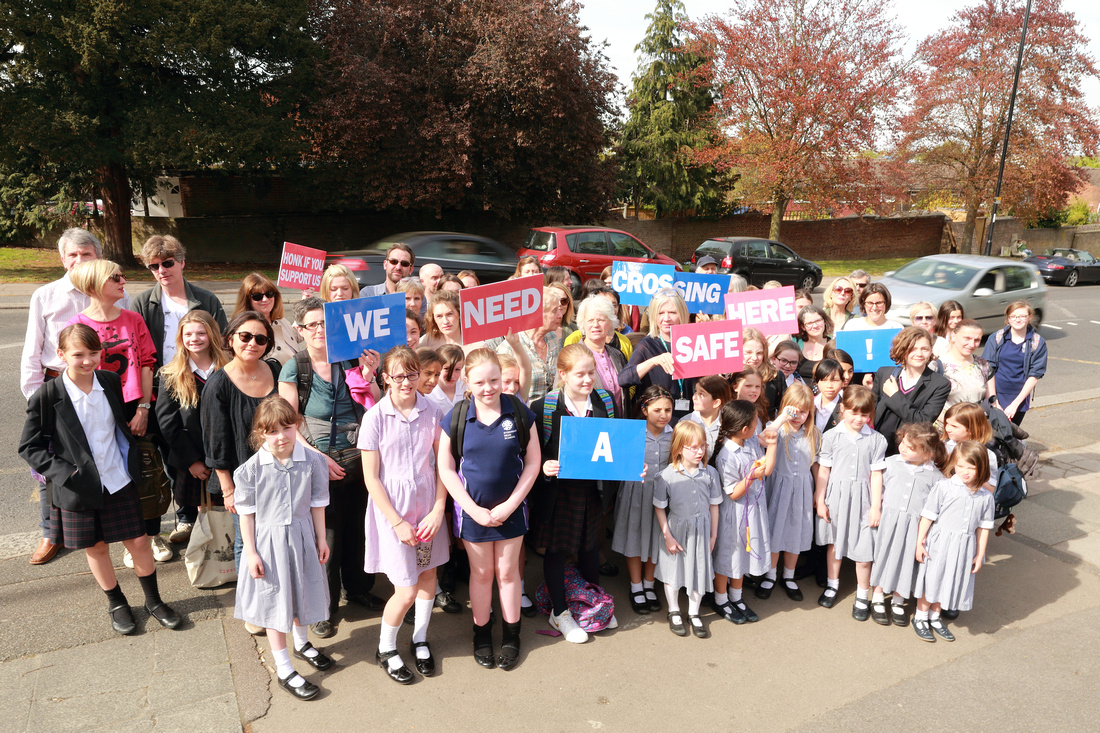 As Londoners went to the polls to vote for a new London Mayor and Assembly, the students, parents, staff and neighbours of Sydenham High School called on the successful candidates to press Lewisham Council to provide a safer road crossing on Westwood Hill.

The busy crossing point outside the school, which also leads to Kirkdale’s shops, Wells Park and other local amenities, lost its School Crossing Patrol Officer at Easter and, despite advertising by Lewisham Council, no candidates have come forward.

When the previous patrol officer retired in 2014 it took 12 months to recruit a replacement.  Whilst the Council has promised to continue the latest search, the school and its supporters – including the Sydenham Society and Sydenham Assembly member and school governor Angela Hall – now believe that the time has come to demand a permanent controlled crossing to protect the children and adults who regularly have to cross this very busy road.

Lewisham Council has so far rejected the idea of a fixed crossing, citing a lack of accidents and the fact that there is a zebra crossing at Cobbs Corner – some 5-10 minutes further down the hill so not in the least relevant.

The school’s own research shows that in addition to many of its 600 pupils, children from both St Bartholomew’s CoE Primary School, Sydenham Girls’ School, and The Peak use the crossing along with staff and local residents heading down Longton Grove to Kirkdale and beyond.

Sydenham High’s Headteacher Mrs Kathryn Pullen can’t understand the Council’s reticence:  “There is a raised platform and a pelican crossing outside Sydenham Girls School on Dartmouth Road – so why not here? We’ve avoided casualties so far but, given the volume and speed of traffic going down Westwood Hill and the behaviour of some motorists, we are extremely concerned that it’s only a matter of time before we have a serious incident.  We shouldn’t have to wait until that happens to expect protection for our children, staff and neighbours.”

Sophia Michael, aged 13 and a student at Sydenham High, said: “We really need a proper crossing for everyone’s safety.  I’ve myself witnessed some close shaves when girls are crossing the road.  It would be a lot more reassuring if we had lights there.”

Pat Trembath, who is President of the Sydenham Society, said: “As a local resident I’m very aware that vehicles coming down the hill, including buses, regularly exceed the speed limit, even at times when children are on their way to and from school.”

Angela Hall, who is a member of the Sydenham Assembly as well as a school governor, echoed this concern.  “A Safer Streets speed watch on Westwood Hill between 8am and 9.30am on 15 April logged no less than 103 cars exceeding the speed limit – some at more than 40mph.

She continued: “All other schools on main roads and bus routes within the borough have been given a controlled crossing so it should be the case here too. And it isn’t just a matter of the people crossing at school arrival and departure times; it’s a concern for the community as a whole including children and families who may want to cross Westwood Hill to access the shops and both Wells Park and Crystal Palace Park outside school time when a school crossing patrol officer wouldn’t be on duty.”

Sydenham High School has started a petition on Change.org which has already attracted over 500 signatures and many messages of support in just a couple of weeks. This week’s mass gathering on the hill aimed to gather further support and publicity for the petition.

To sign the petition, go to: https://www.change.org/p/liz-brooker-lewisham-gov-uk-provide-a-safe-road-crossing-on-westwood-hill or write directly to Councillor Chris Best at Lewisham BC.