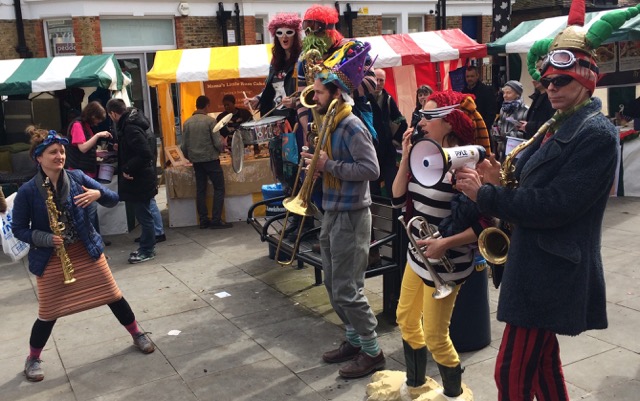 With great jubilation, Sydenham Arts announces the 2016 multi-disciplinary Summer Festival, which will take place over 10 days from the first to the 10th July.

The Summer Fest follows hard on the heels of Sydenham’s highly successful Spring Festival of Music, launched for the first time this year. It attracted national press with a huge spike of interest and attendance for events such as Kathryn Williams and Julie Stirman’s soul and jazz classics. Online profile visits were up over 38%, new followers joined up daily over two months, and Twitter Impressions rose by over 200%.

At this stage the Summer line-up is already taking shape. An inspired campaign to make Sydenham known as the UK’s first Poetry Town is confirmed as the central jewel in the Summer Festival’s crown.

Poetry Town began in 2015 with a weekly poem at Kirkdale Bookshop. Hugely popular, it has grown into a partnership with Sydenham Arts. Weekly poems will be displayed in doctor’s surgeries, cafés, banks, at the bus stop, at the station – filling SE26 with verses by famous poets and locals of all ages. Poetry has the power to reach people at a profound level and articulate experiences in ways that everyday speech and prose cannot. It is an invaluable tool to boost literacy, encourage learning and self-expression. Sydenham Arts has a successful track record of presenting work by local and national poets, past and present. A children’s Poetry Treasure Hunt will ensure all ages can participate.

Sydenham Arts’ Summer Festival will also include Theatre in performance; a Comedy Festival; and a programme of music including the 7th visit from Balalaika, described by one local as offering ‘dangerously high levels of enjoyment.’

The Devonshire Road Folk Festival is another musical event confirmed for the summer. Sydenham’s imaginative contribution to the nationwide WW1 Centenary Celebrations will take the form of a Great War Classroom. This recreation, complete with paid actors, will offer visitors young and old an immersive experience of the effect of the Great War on classrooms in SE London.

The area is bristling with visual artists, and this summer the Sydenham Artists’ Trail will take place over the two weekends of 2/3 and 9/10 July as part of the Festival. Participating artist include Anna Lovely, who trained at Camberwell and the Royal College and opened a local gallery in 2014, as well as the glass artist Pippa Stacey who trained at Central St Martins, among many others. Artist Jacqueline Pennell will present site-specific artworks at Dacres Wood Nature Reserve as part of the Trail.

Additional events will be announced as they join the Summer Festival line-up. 15,000 brochures listing all the performing arts and visual arts will be printed.

Sydenham Arts is a forward-thinking community organisation founded in 2009, which embraces every art form. Led by Helen Goward, their mission is to advance the Arts for the benefit of all, in particular the people of Sydenham. The work of Sydenham Arts would not be possible without the generous support of the Arts Council, The Big Lottery Fund, the Heritage Lottery Fund, Lewisham Council, private sponsors and an army of enthusiastic volunteers.