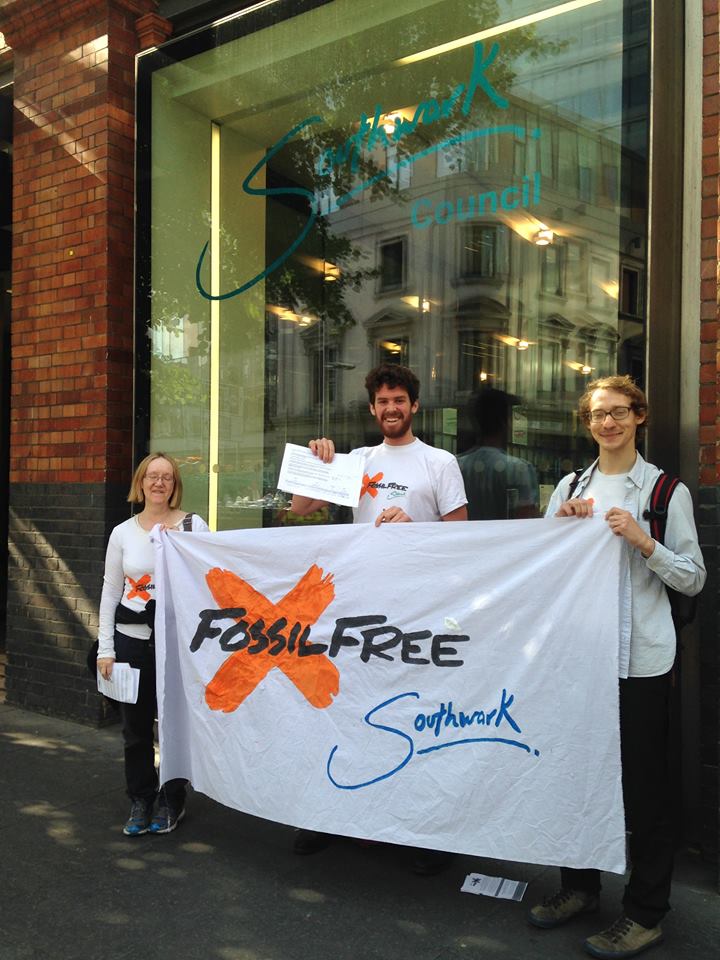 Fossil Free Southwark – the local fossil fuel divestment group – will this Saturday (1st August 2015) set out to win the hearts and minds of local Southwark residents to their cause. On the day – dubbed “Super Saturday” – members of the group will hit libraries, galleries and leisure centres across the borough, seeking to raise public support for their goal of forcing Southwark Council to sell their pension fund’s shares in fossil fuels companies.

The group will meet at Camberwell Library at 11am, and will visit institutions whose workers are part of Southwark Pension Fund. Right now, fund members can register their investment preferences through a survey being run by Southwark Council. This means now is a crucial time for Southwark residents and workers to be aware of the impacts of investing in fossil fuels.

Fossil Free Southwark is the local campaign within a global movement which has become the fastest-growing divestment movement of all time. They argue that Fossil Fuel divestment is urgently needed to send the message to companies that the continued extraction of oil, coal and gas no longer enjoys public support in the face of catastrophic climate change.

The group argue that the Southwark Pension Fund is complicit in the destruction of the planet and the devastation of millions of lives by investing in these companies. The Pension fund is also risking the pensions of its members, as fossil fuel investments will become increasingly unprofitable and risky, according to investment experts.

“It’s troubling to think that my pension fund supports the wanton destruction of life on earth as we know it” said Susie Messenger, 27, who is a recent signatory to the group’s fast growing petition asking the Council to commit to going fossil free.

Group member Tytus Murphy said: “To prevent the worst impacts of climate change, 80% of fossil fuels that companies already must be kept in the ground. We have no other real choice. I hope that Southwark Council will follow the examples set by other city Councils, like Oxford and Bristol that have stopped investing in fossil fuels.”