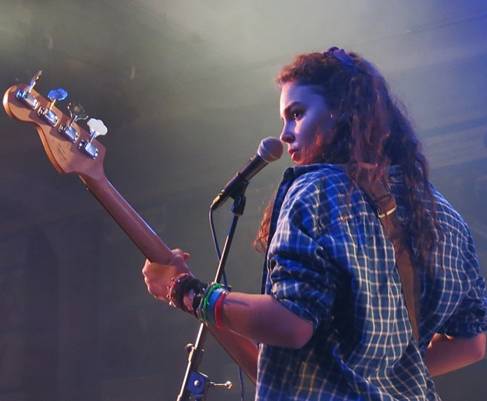 Three young artists (all 15) who triumphed in this year’s Battle of the Bands (BotB), held recently at Sydenham School (Dartmouth Road).   They called themselves ‘Kenopsia’ – a term for just the sort of uncanny feelings aroused by deserted places usually bustling with life.  Not that there was anything still or silent about their performance or its reception as the three teenagers  – Hannah Riley and Ciara Clarke from Sydenham and Orla Mantle from Crystal Palace – as they triumphed with their version of Two Door Cinema Club’s ‘What You Know’.

The event’s organiser Nathan Thomas said, “Sydenham is known for its bands and there were over 20 to choose from.  These were whittled down to nine for the Battle night itself who then faced our judges made up of staff and last year’s student winners.  They were evaluating everything from each group’s collaboration, their interpretation of their songs and their style.”

“We have been together for just over a year and practice several times a week,” said Kenopsia singer and base player Hannah Riley.  “It is great to have won.  We received a £100 in music vouchers to spend in Rough Trade Records and a box of chocolates.  It will be good being defending champions next year.”

A substantial crowd gathered for the occasion and were hugely appreciative.  “I am so proud, I could die,” said mother Agata Zielinska-Hryn having seen her daughter Maya Zielinska perform in the Year 9 band ‘Electric Outlines’.  And in her comments that ended the evening head teacher Carolyn Unsted praised the girls for their commitment and determination:  “Tonight is all about what you can do if you set your hearts on it – it is the culmination of your effort, energy and above all, your friendships.  The confidence and independence you’ve shown were formidable.”

Current students followed in the wake of recent successes on stage of ex Sydenham Student, Katie Brayben, star of the hit Carol King Musical ‘Beautiful‘ and winner, only last week, of an Olivier Award for Best Actress.