School treks 7,192km in a day for Nepal earthquake relief 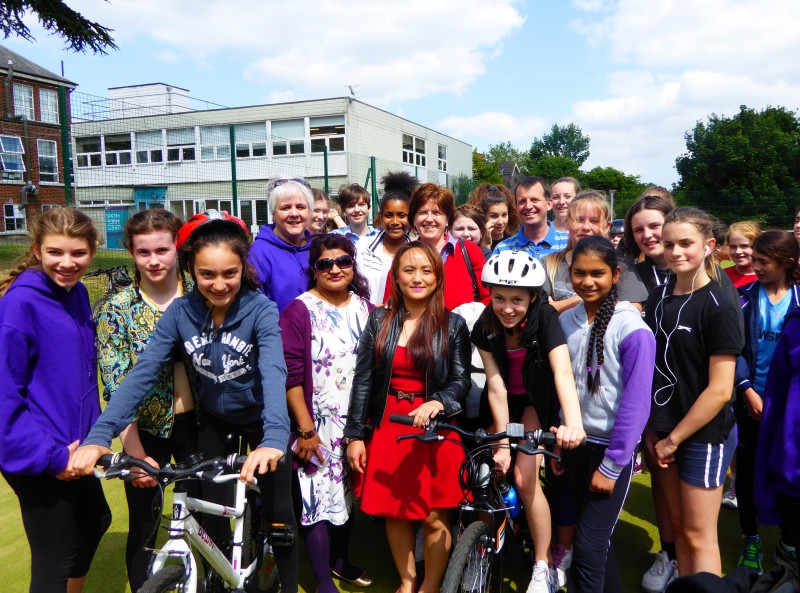 Students and staff at Sydenham High School GDST travelled 7,192km – the approximate distance from London to Kathmandu – in a challenging 12-hour sponsored event to raise awareness of and aid for the victims of the recent devastating Nepal earthquakes.

Over 450 girls from Reception to Year 10 cycled, jogged, ran and walked to Nepal on the school’s Astroturf, as well as rowed in the fitness suite, in shifts from 7am throughout the school day. They were joined from 4pm by family, friends and combined staff-student relay teams to help reach the target with an hour to go. Some older girls also came back from study leave to take part.

Several teachers challenged themselves to trek for the full 12 hours, including Deputy Head Karl Guest who, together with Acting Head of PE Georgina Calvert, masterminded the fundraising event.

The aim of the trek was to not only raise awareness of the difficulties faced by the people of Nepal but to provide actual aid.  In addition to all participants making a £2 donation to wear sports kit for the day (maximising ‘travel’ time) girls also gained sponsorship in the form of items from a specific aid package list.  The list includes: emergency torches, dried food, cooking pans, bedding, children’s clothing and water purification tablets.

The intrepid trekkers were joined in the afternoon by Geraldine Finney, the Regional Director (London) of Excelcare (pictured, centre of second row in red), which has a large number of Nepalese employees working in its seven London care homes, two of which – Castlebar and Peartree – are near the school. Also taking the trek were Bromley-based Excelcare nurses Bhim Shakya (pictured front row centre left) and Anita Gurung (pictured front row centre right in red), whose father is a Gurhka.  They are co-ordinating major aid deliveries to particular areas of the stricken region which are home to the families of staff working in the care homes including Bhim and Anita.  The aid items collected at Sydenham High will join one of these consignments.

“The staff at Excelcare are delighted and touched at the compassion shown to them by this amazing school community,” said Ms Finney.  “We hope that links forged through this event can be built upon, maybe with some of the girls visiting the families in Nepal in the future, so that they can see exactly where their efforts have made a difference.”

“Over 8,000 people lost their lives in the recent earthquakes in Nepal and many more have been left injured or homeless,” said Karl Guest.  “We were determined to bring our school community together to not only raise awareness of the difficulties survivors face but to provide them with physical aid.  When he heard about the Geraldine’s plans we were only too happy to join forces and get the girls to collect aid packages as well as money.  We’ve had an amazing response and will be providing hundreds of items for their appeal.”

The school has also opened a JustGiving account in support of the Earthquake Appeal, which has already raised over £1,700. Further donations can be made there which will go directly to the Disasters Emergency Committee campaign.