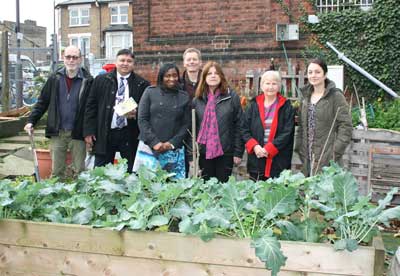 The local group had already established a garden on spare land at the station and the signing of the Station Partnership formalises the commitment between the two to work together further.

The station garden includes flowers, as well as vegetables, and is looked after by the Crofton Park Railway Group. Thameslink has agreed to let the group expand further on the station, and will also pay for an in-depth survey of the space to support the group’s aspirations.

The garden has helped transform an overgrown area of the station which, historically, was plagued with litter, including a number of old mattresses. Since the creation of the garden, fly-tipping has reduced significantly and the group has plans to make it even more attractive to the 700,000 passengers who travel through the station each year.

Thameslink will also install a community board on the station’s footbridge to help promote the garden and events organised locally.   Kay Pallaris, member of the Crofton Park Railway Group, said: “It’s very exciting to be the first station partner for Thameslink. It’s even more exciting to think we are the first of many communities who can also get involved in their station. Partnership is very important in this day and age, and it’s positive to enable change in the neighbourhood.”   Crofton Park Station Manager Graham Duncan added: “We really like our stations to be part of the local community and the partnership is a great part of our engagement with the local area. This is the first of many station partnerships we hope to establish in the coming years.”   Station Partnerships are agreements between the rail operator and community groups to build on-going relationships to develop stations together, in ways tailored to the individual area.

Through work with Sussex Community Rail Partnership, Southern already has almost 50 station partnerships, ranging from plants and gardens at stations to showcasing art produced by local schools. Gatwick Express, Great Northern, Southern and Thameslink are all keen to establish more station partnerships and are able to offer small funds to support setting these up.