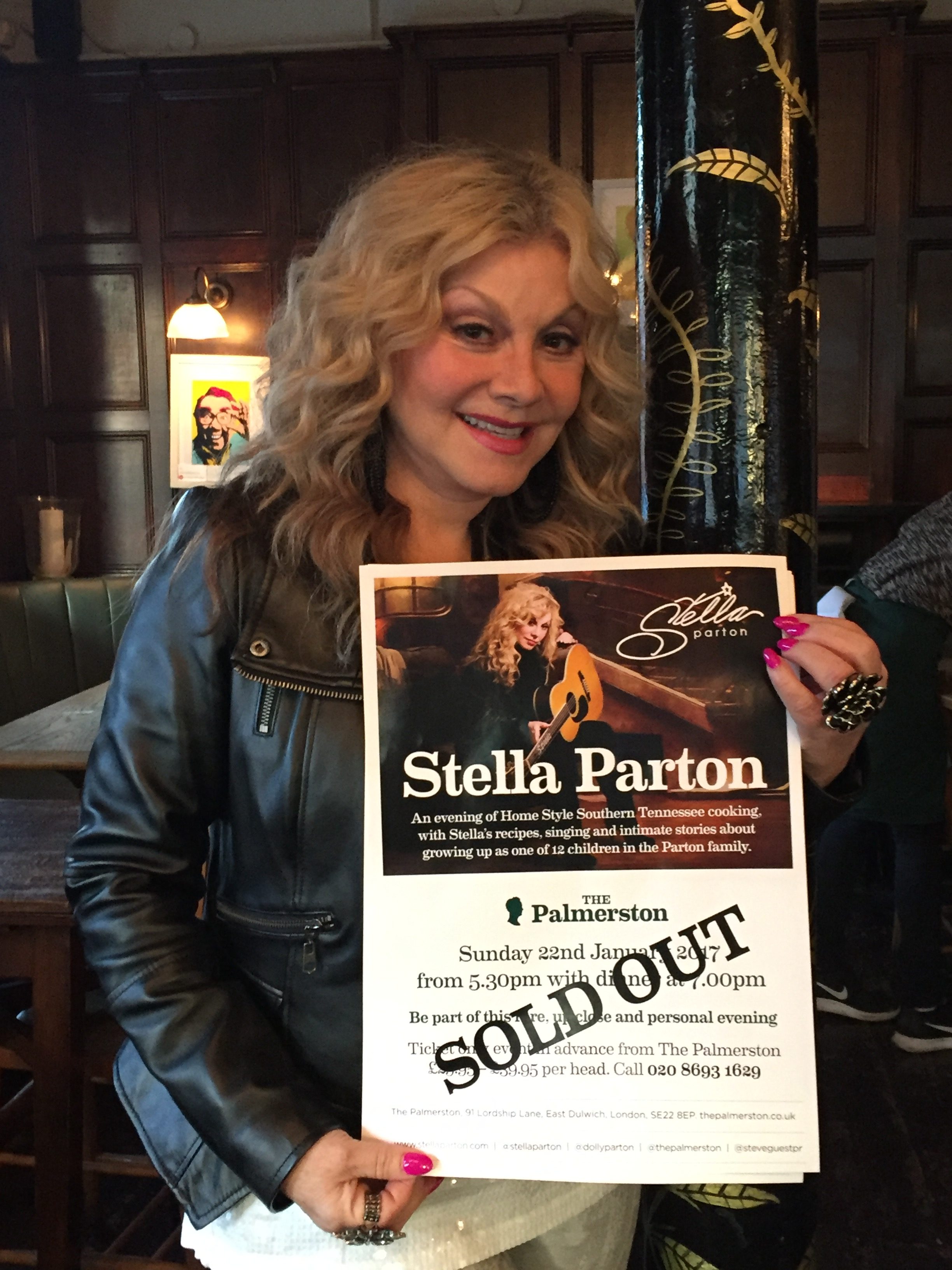 There are some things in life that you don’t expect and having an international country singer perform in East Dulwich is one of them!

This Sunday sees An Evening of Home Style Southern Tennessee cooking, with Stella’s recipes and cooking with James Donnelly, Head Chef at The Palmerston, East Dulwich.

Stella will be in attendance in the Kitchen and The Palmerston, in a very special evening which will incorporate Stella singing a few songs, some of her own and some of her sister Dolly’s hits too.

She will regal some lovely intimate stories about growing up as one of 12 children in the Parton family home in the Smokey Mountains of East Tennessee some of which will make you laugh and cry.

It will be a rare up close and personal evening where Stella will entertain the room and come and chat with you whilst you enjoy a sumptuous feast of Home Style American food, served the way it is in the Smokey Mountains, from recipes she, her mama and Dolly cooked for many years.

Read our interview with Stella in the forthcoming issue of SE22, out on the 31st January.

Stella is honoring her iconic sister Dolly Parton with Mountain Songbird: A Sister’s Tribute’, an album of re-recorded songs previously made famous by Dolly which also includes a new duet Dolly and Stella co-wrote together, titled “More Power to Ya.” The album is out now via Man in the Moon Records.

“I am always excited to perform in the UK, simply because the audience have shown so much respect for my music. I have been asked many times throughout my career to record an entire album of her music, but in my heart and mind, I never felt I could ever do her music or performances justice. So in the end, while making the decision to record this tribute album of eleven of my favorites, I decided to sing the story songs because they resonated with me the most,” Stella said.

“Dolly has always been my favorite songwriter, although I grew up in a family chocked full of them. It was indeed a daunting task to choose eleven of my favorite songs from a catalog so vast. I have chosen to sing them as sincerely and respectfully as possible and I hope you can hear that in my humble and honest approach to my sister’s beautiful songs. I am pleased and honored to share my sister tribute” Stella said.

“Stella is a great singer, entertainer and songwriter. All the more reason I am so proud she decided to do a tribute CD of my songs,” Dolly said.

“She was there from the beginning of my career and always complimented and encouraged me in my writing. I admire and respect the way that she chose to do my songs. She stayed true to the original spirit in which I wrote them and yet found a way to make them her own. I really love how they turned out and I think you will, too. It’s been a personal source of joy to be able to hear this loving tribute from one sister to another and just to be able to work that closely with her. I am especially proud of the song we wrote together “More Power To Ya”. I hope you will enjoy this CD as much as we’ve enjoyed working on it for you,” Dolly added.

Tickets are available from www.axs.com www.aeglive.co.uk