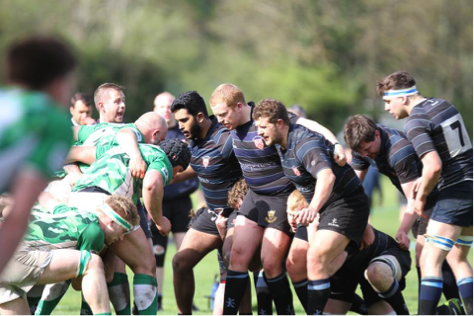 Old Alleynians 1st team, captained by James Knox and Tom Pickett, completed yet another season in tier seven of English rugby by overcoming a mid-season slump and winning two of their final three league games to stay in London South East 2 for 2016-17.

The season began on September 19th, a rather significant date as it also clashed with the start of the Rugby World Cup and a coincidental mass of player unavailability for the OA’s. Despite the slow start and no win in their first two league games a corner was turned in October and the brand of free flowing rugby returned to the team with four wins being picked up out of the next six. A particular highlight in amongst those wins was during the 100th cap celebration for last year’s captain Rhys Hopkins against Thanet Wanderers when OA’s defence stood strong and a 25-3 win was secured and a memorable night of celebrations in the clubhouse followed suit.

After a collection of good performances what was to follow can only be described as home sickness as OA’s turned a corner into December and hit the proverbial brick wall. With weather conditions preventing OA’s from playing at home for ten consecutive fixtures, the away day blues set in. OA’s picked up just one win and five losing bonus points in amongst those fixtures, and when March finally came around and with no wins to show for their efforts it was crunch time for the lads as wins were now needed to ensure safety from relegation.

After a long absence from home games the already relegated Ashford arrived and were duly dispatched with OA’s securing the bonus point win they needed to set them on their way. With OA’s still needing another win, next up were Horsham who had played their own brand of attacking rugby throughout the year and were ready to take the game to their opponents. The match that was served up did not disappoint.

The game ebbed and flowed with defences on top for most of the first half and the scores went in level at the break – 6-6. The second half however proved to be nothing like the first. Horsham opened up an almost unassailable lead of 11 points with 10 minutes to go but with Old Alleynians regrouping they managed to score two tries and one conversion of their own to win the game. The final try came in spectacular style as from the kick off OA’s set off from within their own 22m and with just two minutes left finished by scoring the try that would ultimately keep them in the league. Cue pandemonium.

Player of the season went to scrum half Tom Unwin and big praise goes to all of those players who showed the commitment and team spirit that lifted the club through the tricky mid-season slump. The core of a strong side is beginning to develop and set’s the OA’s up quite nicely to start matching their ambitions to challenge for higher honours in 2016-17.

OA’s is an amateur club and welcomes all standard of players to its ranks fielding five senior teams and are always keen to see new faces when pre-season starts in the first week of July.