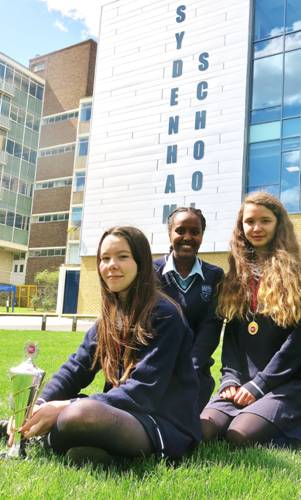 Amy Gibbs (15) from East Dulwich is a top debater  – a member of the Sydenham School team that were recently crowned London regional champions of the Deutche Bank Debate Mate Cup held at the London School of Economics.  The team had to face a day of gruelling non-stop debating. Over 140 teams from 70 schools took part in the event, with the top two – Sydenham School and City of London Islington College – in the ranking after three debates going through to the final.  “It was very tough in the end because we had to argue in favour of arming the police,” said Amy, “something none of us were in actual favour of.

When it came to the judges’ announcements at the end and we were not among the runners up, we all started to pack up, and so it was a huge surprise to hear we had won.  The judges praised our strategy – our use of points-of-order to get across counter-arguments and the way we divided up responsibilities among our team so that everyone has strong things to say.”  The Sydenham School team has booked itself a place in the national Debate Mate final due to happen later in late June or July (tba) either in the House of Lords or House of Commons.