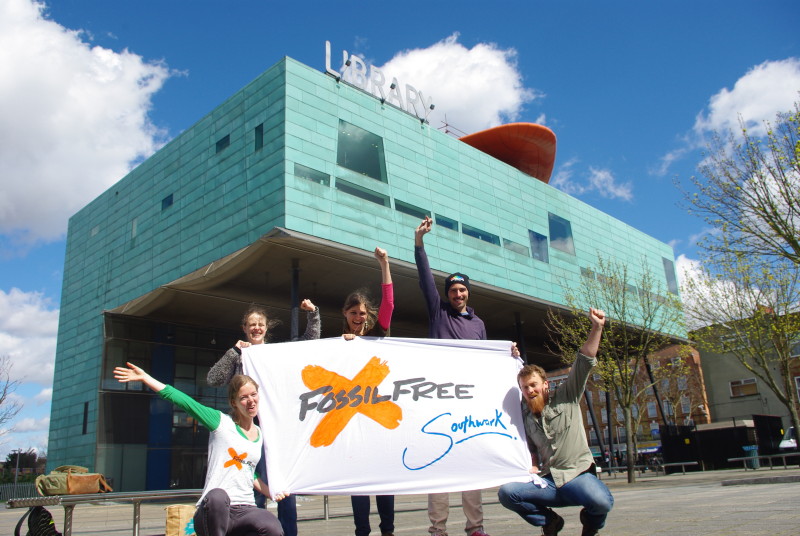 A new campaign launched yesterday (16th April 2015) seeks to pressure a £1 billion investment fund, managed by Southwark Council, to go “fossil free” and end all investments in the top 200 fossil fuel companies. The Fossil Free Southwark group states that more than £17 million from the fund is indirectly invested in oil, coal and gas companies – but warns that its undisclosed investments means this is just the tip of the iceberg and the real figure is likely to be nearer £70 million.

The campaign, which is run by a voluntary group of Southwark residents, launches this week with an online petition calling on Southwark Council to commit to remove all direct and indirect investments from fossil fuel companies. The group’s first event – a free screening of documentary “Do the Math” which sets out the need to stop investing in climate change – will take place in the Bussey Building at 7pm, Thursday 23rd April.

Recent analysis has shown that 80% of all known fossil fuel reserves need to remain in the ground if the global warming is to be kept within the internationally-agreed 2 degree target. The group says this makes fossil fuels a dangerous investment for Southwark’s £1bn pension fund. It says the environmental and economic costs of climate change to the Borough, and the financial riskiness of investments in fossil fuels which are ultimately ‘unburnable’ make it essential that the pension fund stops investing in fossil fuels. In the past year, Oxford and Bristol City Councils  have committed to divest from fossil fuels and campaigners hope this precedent will encourage Southwark to follow suit.

The launch of Fossil Free Southwark comes at a time of rapid growth for the global movement calling for fossil fuel divestment. This week, World Bank President Jim Yong Kim called for the removal of financial and tax incentives for companies to exploit oil, gas and coal. Calls for the majority of fossil fuels to stay in the ground have been supported by public figures as diverse as Archbishop Tutu, Ban Ki Moon and Mark Carney, Governor of the Bank of England.

Globally, more than 180 institutions representing over £30 billion in assets have already committed to divest including the British Medical Association, San Francisco City and the Church of Sweden. In the UK the campaign has spread to universities, churches and cities across the country.

Julia Koskella (26), member of Fossil Free Southwark, said “It’s really exciting to bring the fastest growing divestment movement in history to Southwark. We need to act locally and ensure our representatives do what’s right and invest ethically.  The companies they’re investing in are creating devastating climate change, and are insecure investments financially. I’m looking forward to meeting interested Southwark residents at the film screening on 23rd April and building this campaign through fellow citizens.”

Fossil Free Southwark invites you to join them for a free screening of ‘Do the Math’, a documentary about the financial need for divestment from fossil fuel companies.