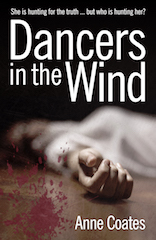 Local author, Anne Coates, will be signing copies of her début crime novel, Dancers in the Wind, on Saturday 29 October from 3 to 5pm in The Palmerston, Lordship Lane.

The book is already garnering four and five star reviews since its publication on 13 October, 2016.

About Dancers in the Wind

The book is set in 1990s London and features East Dulwich at that time. Freelance journalist and single mother Hannah Weybridge is commissioned by a national newspaper to write an investigative article on the notorious red light district in King’s Cross. There she meets prostitute Princess, and a police inspector in the vice squad, Tom Jordan. When Princess later arrives on her doorstep beaten up so badly she is barely recognisable, Hannah has to make some tough decisions and is drawn ever deeper into the world of deceit and violence. Three sex workers are murdered, their deaths covered up in a media blackout, and Hannah herself is under threat. As she comes to realise that the taste for vice reaches into the higher echelons of the great and the good, Hannah understands she must do everything in her power to expose the truth …. and stay alive.

Throughout her career, Anne Coates has had a foot in both publishing camps as a writer and an editor, moving from book publishing to magazines and then freelancing in both. Having edited both fiction and narrative non-fiction, Anne has also had short stories published in a variety of magazines including Bella and Candis and is the author of seven non-fiction books including Applying to University and Surviving University published by Need-to-Know. She founded the website, Parenting Without Tears, and linked to that, Endeavour Press published two of her guides: Living with Teens and Loving Discipline.

The sequel to Dancers in the Wind, Death’s Silent Judgement will be published in May 2017 and Anne is currently writing the third book in the series.

Published by Urbane Publications, Dancers in the Wind can be ordered from bookshops and from Amazon. Copies will be available to buy at the signing session – there may even be cake!