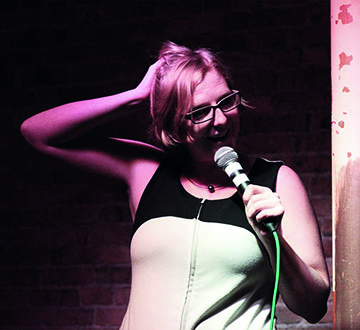 After a number of creative professions (potter, marine biology, furniture design & landscape architecture), I have settled into stand-up comedy. I also started Laugh Train Home in 2013, a comic run comedy night who (since September) have their second club night in SE23. On a day to day basis, I am an upbeat, chatty American who plays water polo, is a massive foodie, decent cook and is often seen riding a bright pink Brompton.

Oh yes. Probably too well. While at the Fringe, I had one enter my flat and search for a photo I needed for my show. I was about to ask him to go through my hard-drive when someone informed me ‘British people don’t ask that of their neighbours’. Whoops!

The most famous person you’ve seen or met?

I feel like naming comedians is cheating a bit, especially as they come to play my club.

What’s your favourite place for a night out?

Attending one of my comedy nights, every Tuesday at The Honor Oak!

The best meal I’ve ever had…

See Jerk above. Outside the area, my (much more successful) sister took me to a Michelin star restaurant in Stockholm. EVERYTHING was AMAZING. Oh and if you are in San Sebastian, get the tasting menu at Bar Zeruko.

What’s your favourite place to go for a drink?

I’ve gotten to know the Honor Oak from running our night there and I love it. They always have great beer (and great food), 2 beer gardens and always something on. But most of all, as a former landscape architect, the green wall inside is amazing.

I bought my current flatlette on an ebay-like housing site, right before everything became unattainable. Yes, it was as weird as it sounds. And it’s about the size of a washing machine, so I’ve had to design & built all the furniture to have multiple functions (get in touch if you are in the same boat). But I love this area and you are now all stuck with me forever.

If money was no object…

To be honest, I think I would just write and perform comedy. I love making people laugh. But I would also travel a lot. I LOVE seeing the world.

I have ALWAYS wanted to be a rapper or a hip-hop dancer. There is still time…