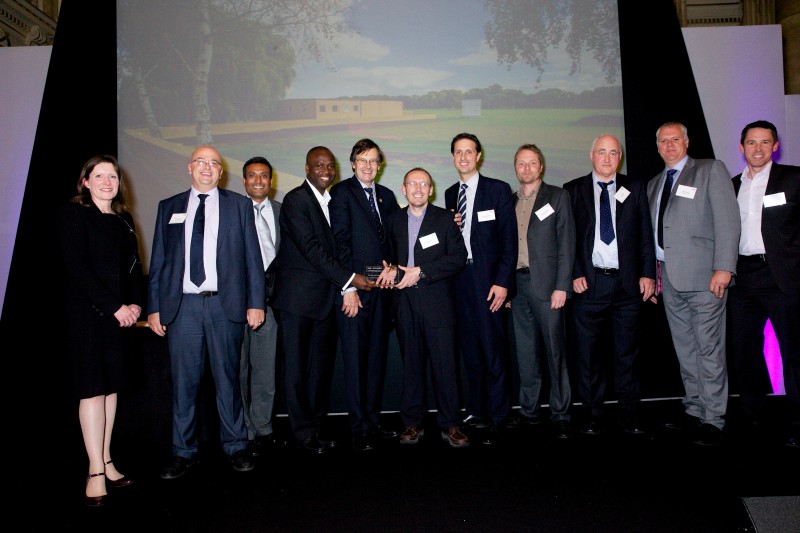 The Herne Hill Flood Alleviation Scheme in Dulwich has been awarded the prize for community contribution at the Institution of Civil Engineers’ (ICE) London Engineering Excellence Awards 2015 in a ceremony hosted by BBC London reporter Alice Bhandhukravi and ICE President David Balmforth alongside Deputy Mayor for London, Cllr Victoria Borwick MP AM.

This project utilised parks in an innovative approach to protect over 100 homes and businesses from risk of flooding in Dulwich and Herne Hill caused by runoff rainfall. Sensitive design helped avoid the appearance of engineering structures in the parks while creating play areas for local children.

The Circito Bridge in Panama received the ICE’s Designed in London Award, which recognises the significance of work conducted by London’s civil engineers both nationally and globally, and the Moorgate Exchange was awarded the Evening Standard People’s Choice Award, after being voted for by over 3,000 members of the public. The Hammersmith Flyover Strengthening and Refurbishment Works was awarded the Re-engineering London prize.

The awards are the premier showcase for engineering achievement in London and are attended by more than 300 senior figures from London’s built environment and construction sector. Seventeen infrastructure and building projects were shortlisted for the annual awards, delivered in association with Topcon.

Mayor of London, Boris Johnson MP, said “I am very supportive of this event held by the Institution of Civil Engineers to recognize some of the innovative and useful contributions that civil engineers have made to the life of the city.

London is ever evolving, and these projects show the important role engineers play in designing, constructing and maintaining London’s infrastructure as our industries and populations grow. This year many of you contributed to my London Infrastructure Plan 2050, which makes the case to Whitehall for a sustained and secured investment so we can plan and build accordingly. I appreciate your help in making that case.”

Suzanne Moroney, Director of ICE London, said “These awards show the extent of what London has to offer in engineering, innovation and construction and celebrate a wide range of fantastic infrastructure projects being undertaken by London-based engineers. All of the winning projects showcase the vital contribution that engineering makes to urban life. I congratulate all involved.”

Judgements on engineering excellence were based on criteria such as innovation, creativity, sustainability, health and safety and social value.