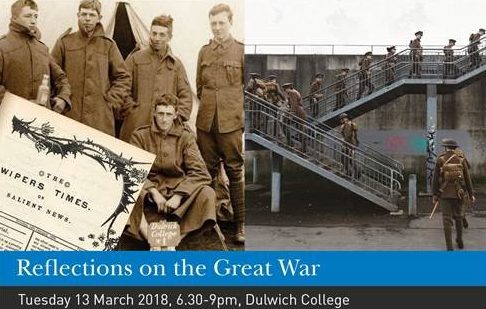 Dr Nick Black will present a new College website which records the lives and service of the 531 Old Alleynians who died during the conflict and opens up the wealth of material in the College archives to a wider audience.

David Parfitt and Nick Newman will speak about their popular BBC dramatisation The Wipers Times, with a scene acted by College pupils, and a presentation on Turner Prize-winning artist (and OA) Jeremy Deller’s modern memorial ‘We’re here because we’re here’ which marked the centenary of the start of the Battle of the Somme and captured the imagination of many throughout the country.