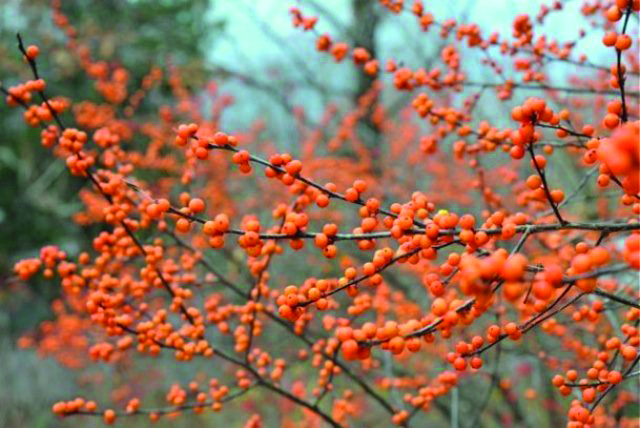 Whether it’s attractive bark, shiny berries or a splash of colour, there are lots of plants to add winter interest to your garden….

Prunus serrula is another winter showstopper with shiny mahogany bark striped with lenticels.

Parrotia persica is actually a shrub but can be grown as a wonderfully sculptural multi-stemmed tree. On mature trees, the steely grey bark flakes off in patches giving interest and texture in winter.

Acer griseum (Paperbark Maple) is a small tree with chestnut bark that peels of to reveal cinnamon coloured wood beneath. Or for a brighter, redder bark, try Acer palmatum ‘Sango-kaku.’

Heleborus niger is a pretty white hellebore that flowers from December to March. A must for winter gardens , there are many varieties of hellebores in pretty colours from pale pink to reddy purple such as ‘Helleborus x hybridus Havington red. Buy them in bloom to make sure you’ve picked a flower you love.

Clematis cirrhosa ‘Jingle Bells’ has creamy bell-like flowers and evergreen foliage from December. Or for a splash of pinky brown look out for Clematis cirrhosa var. purpurascens ‘Freckles’. Both ideally need a sheltered south-facing wall.

Cyclamen coum are delicate hardy cyclamen with tiny pink flowers and silvery leaves (December to March) that make a gorgeous carpet under deciduous shrubs and trees with ferns and snowdrops.

Narcissus ‘Rijnveld’s Early Sensation’ flowers as early as December – perfect for those too impatient to wait until spring for their daffs.

Hamamelis x intermedia ‘Jelena’ is a shrub that makes a winter focal point with its delicate golden orange beautifully scented thread-like petals on bare stems from Dec and March. Great for bringing into the house for a scented flower display.

If you have a large garden, Cornus alba ‘Sibirica’ (Dogwood), with its brilliant coral stems in winter makes a wonderful display planted in a group. I also like Cornus alba ‘Elegantissima’ which has pretty variegated leaves in summer. Intersperse with gleaming olive stemmed Cornus sericea ‘Flaviramea’ for more impact or underplant with crocus or bright evergreen grasses such as Carex ‘Evergold’. Prune at least some of the stems hard back each year as young stems produce the colour.

Corylus avellana ‘Contorta’ (contorted hazel) has curling stems and catkins that make a lovely focal point in a winter garden.

Callicarpa bodinieri var. giraldii ‘Profusion’ has clusters of amazing purple/pink berries, which cling to bare branches – bringing a serious wow factor to the garden in winter.

Nandina domestica is a pretty upright airy shrub with spectacular clusters of bright red berries in the winter against purplish leaves.

Skimmia japonica ‘Nymans’ is a striking shrub with larger red berries – as long as a male variety is planted close by.

Ilex aquifolium ‘J.C.van Tol’ is an almost spineless self-fertile holly so has guaranteed bright red berries on dark into winter – or until the birds get at them!

This article first appeared in the December 2016 issue of SE22 magazine.