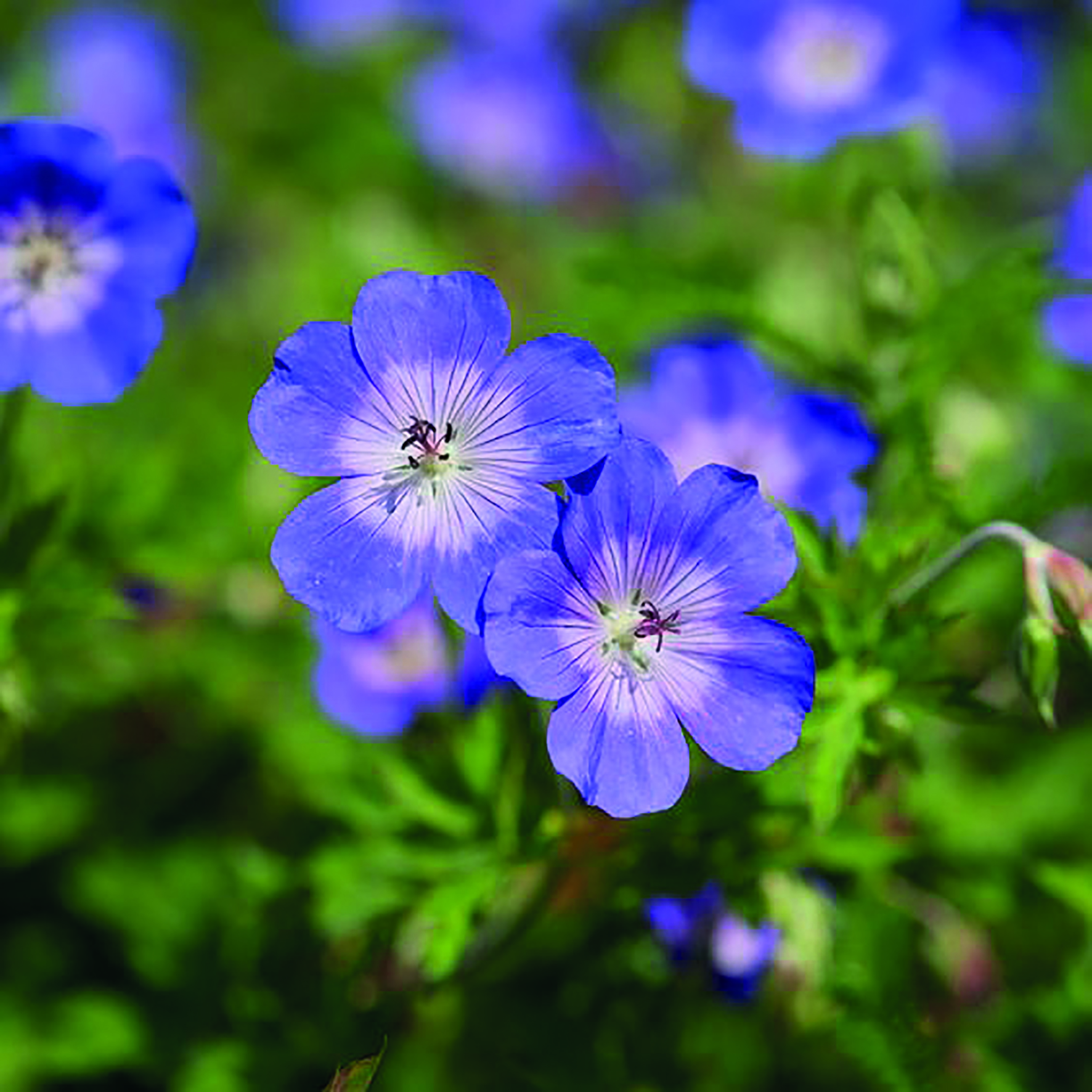 Pretty, a great filler, easy to grow, slug resistant but loved by bees, long flowering, and shade tolerant, geraniums are an absolute must. With so many to choose from, here are a few of the best.

One of the most popular geraniums, Geranium ‘Rozanne’ has striking large blue flowers with white centres and lovely mottled foliage. Happy in sun or part shade, its spreading habit makes it great ground cover, but do give it space. Most impressive of all is its amazingly long and late flowering period, from June right through to November.

Newer hybrids include ‘Azure Rush’ a more compact version of ‘Rozanne’ with paler blue flowers and ‘Lilac Ice’, which is less spreading and has lighter foliage and pale lilac pink flowers. Or try ‘Pink Penny’ which will fill your garden with hot pinky/mauve flowers from June to October. (These newer hybrids take a while to get to local garden centres but are available on line from Crocus (crocus.co.uk) or specialist nurseries.)

‘Johnson’s Blue’ is another popular classic (voted RHS plant of the Centenary in 2013), with delicate foliage and a mass of papery blue petals from May to August. It’s great under roses or shrubs, in full sun or part shade – but too much shade can make it a bit leggy. Similar varieties include the newer ‘Brookside,’ with masses of intense blue flowers, and its slightly bigger seedling, ‘Orion’, which has larger, more violet blue flowers, on stalks high above the foliage.

The spring flowering geranium phaeum with their wands of small flowers and striking patterned leaves are great for a shady spot – whether dry or damp, amongst ferns.

Geranium phaeum black widow is very stylish with its deep purple-black flowers and beautiful dark leaf markings. ‘Samobor’ is very similar, with slightly browner flowers and paler leaves. Or for something less somber, ‘Alba’ has airy sparkly white flowers, great for lighting up dark corners. The more unusual varieties ‘Margaret Wilson’ with its purple flowers against and lime green variegated foliage and ‘Rose Madder’ with gorgeous brownish pink flowers are also worth looking out for.

The bigger and bolder Geranium psilostemon with its vibrant magenta flowers with a purple black eye is stunning, but needs space (about a square meter). It flowers from June to August and the leaves turn fiery red in Autumn. The hybrid, ‘Patricia’ has the same dark eye but brighter pink flowers and is slightly more compact (60cm high) and longer flowering. The rangier Geranium ‘Ann Folkard’ has bright green early foliage and rich magenta flowers with the dark eye. Again it needs space scrambling to a meter and flowers until September.

This article first appeared in the July 2016 issue of SE22 magazine.