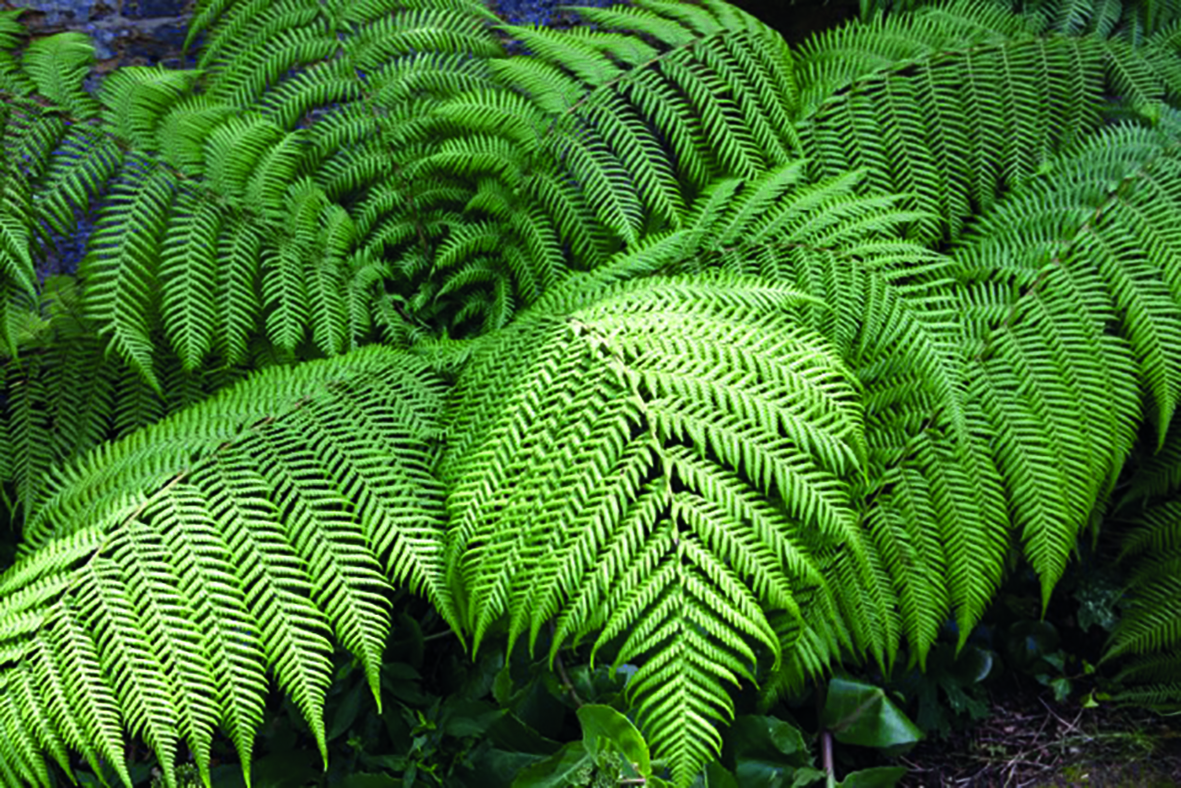 Ferns are an intriguing, versatile and very useful group of plants for which my love has grown over the years. I couldn’t contemplate making a garden without them these days. They are very adaptable plants and come very handy for these dry shade corners where not much else would grow. They are the perfect solution to underplant trees, to add texture and movement to shade or semi shade borders and to soften a path or a patio’s edge. They evoque walks in woodland’s dappled shade, and somehow speak to us of a time when the world was densely wooded and wild things roamed. They also bring a sense of calm, I’m not sure why. Always plant in a group as they would in the wild, as they look best this way but also will thrive by improving each others growing conditions. Some ferns don’t mind the sun too much but don’t put them in sunny borders, they will look out of place and their delicate foliage will get scorched.

Deciduous ferns look unsightly in autumn so do mix with evergreen ones but don’t exclude them altogether as watching their fronds unfurling before your eyes every spring is a formidable spectacle not to be missed.

Perfect to underplant pine trees and conifers as they like acid soil.

A cultivar of the native male fern, Dryopteris affinis, found in woodlands in wetter parts of Britain, this is a handsome, shuttlecock fern that keeps its leaves almost all year.

A native of Britain, with soft, dark green fronds that emerge upright before unfurling and falling open. Either cut back the old foliage in early January to allow space for spring bulbs, or leave them in place until April when the new fronds appear.

Known as Harts tongue ferns, they need a cool shady corner to thrive. In the wild they are seen growing in crevices in rocks and stone walls with very little compost.

A native, male fern found naturally in moist woodlands around the UK. This large, handsome fern has feathery, green fronds which form a distinctive, shuttlecock shape and turn coppery in autumn.

Athyrium filix femina, or lady fern is a graceful fern with feathery and lacy, more delicate fronds than its male counterpart.

A tough, hardy fern that is native to the Himalayas. In spring, it produces bright green, shuttlecock-like fronds on upright, hairy stems, up to 90cm high. Less fine in appearance than many other ferns, it nonetheless makes a dramatic statement in a woodland garden or under deciduous trees.

Dicksonia antartica or tree fern are great to add drama or introduce a bit of exotic to your garden. They are very slow growing however and very expansive, require winter protection but are worth it in the right place.

Here are some tried and tested winning plants combos:

Matteucia struttoptheris is a great punctuation within a carpet of Asarum europaeum.

Osmunda regalis and gunneras in bog gardens in large gardens.

This article first appeared in the March 2016 issue of SE22 magazine.