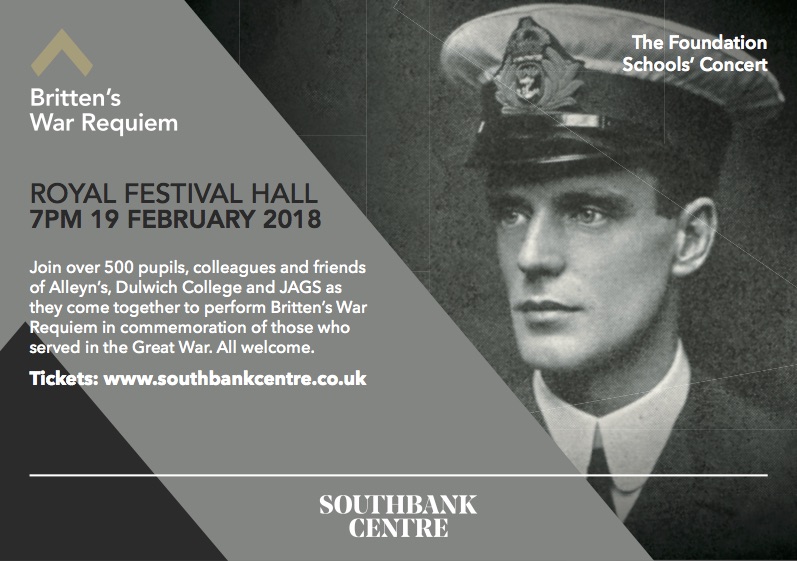 Over 500 pupils, parents and friends of Alleyn’s, Dulwich College and James Allen’s Girls’ School (JAGS) will perform together on the stage of the Royal Festival Hall.

The three Foundation Schools: Alleyn’s, Dulwich College and JAGS will come together on 19 February 2018, to commemorate the 100th Anniversary of the end of the Great War and pay tribute to their pupils and staff who selflessly served their country between 1914 and 1918.

The concert will be conducted by the three Schools’ Directors of Music, Mr Chris Dearmer, Mr Richard Mayo and Mr Peter Gritton, and will also include Herbert Howells’ Elegy for viola and strings. Composed as personal tribute to a fellow student at the Royal College of Music who was killed in the Great War, Howells’ poignant piece makes a fitting companion to Britten’s work.

The Heads of the schools, Dr Gary Savage of Alleyn’s, Dr Joe Spence of Dulwich College, and Sally-Anne Huang of JAGS, anticipate the concert to be a memorable evening of music and commemoration, and a wonderful opportunity for their communities to give rightful thanks to all those who went before us.

All are welcome. Tickets at a range of prices from £15 to £45 are available from the Southbank Centre: www.southbankcentre.co.uk