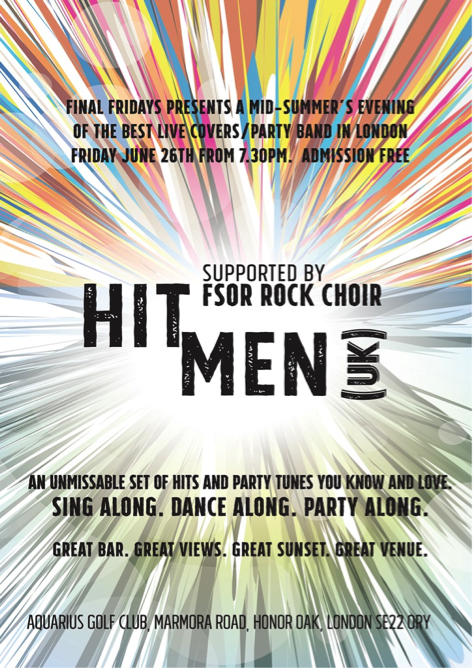 Every last Friday of the month is a free live music event of the very highest quality at Aquarius Golf Club, which is found through a walled gate at the end of Marmora Road on the borders of East Dulwich and Honor Oak.

The Rock Choir is a large and hugely enthusiastic crowd of song-loving enthusiasts who share a love of singing. It’s pretty much guaranteed that you will know all of the songs in their repertoire, and it’s easy to get swept up in their energy and end up singing along. Baz Golin, leader and ‘Dean of Rock’, has promised that the choir will also be joining with the Hit Men for a number (or few).

They perform a lot of classic Rock, Pop, Doo Wop and Motown, featuring songs by The Beatles, Stevie Wonder, Crosby Stills & Nash, Earth Wind & Fire, Bill Withers, Joni Mitchell, Mamas & Papas and the O’Jays to name but a few. And they dabble in some modern songs by artists like Paloma Faith, Cee Lo Green and The Noisettes, too

To cap it all off, the venue is incredible, with views across London’s entire cityscape, the acoustics of the venue are just perfect for ‘unplugged’ music, and the sunset (which is almost guaranteed at this time of year) is simply stunning.

And admission is FREE. Add that to a very reasonably priced bar (premium lager around £4.00/pint) and you’ve got the best Friday night out this side of the Thames.