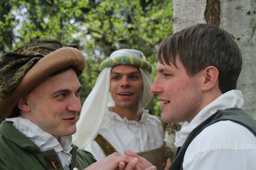 The Festival Players are coming to Café on the Rye for the 6th year on Sunday 14th June at 7.30pm to perform As You Like It.

The company will be fielding their traditional all-male cast. The troupe brings audiences a combined 65 years experience of professional touring theatre.

The shows will be played out an at increasingly varied number of locations from Scottish castles to English village greens, famous Welsh gardens to London commons, island botanical gardens to Roman amphitheatres.

A small cast of six will punch well above their weight, playing multiple roles demanding quick costume changes, as well as performing as singers and musicians. As You Like It will be directed by Worcestershire-based Michael Dyer, former director of Cornwall’s Minack Open Air Theatre.

As You Like It, which features one of Shakespeare’s most famous quotes “All the world’s a stage and all the men and women merely players” is a firm favourite from the Bard’s formidable repertoire, penned around 1599. It sees love blossom for several couples in the Forest of Arden, where the exiled Duke Ferdinand has fled. His daughter Rosalind and her cousin Celia follow him there, in disguise, Rosalind taking on the persona of a boy, Ganymede. They are accompanied by court jester Touchstone. Ganymede is encountered by Orlando, already lovesick for Rosalind. Shepherds and goatherds also join in the sylvan drama of love, betrayal and mistaken identity.

Says Dyer: “It will be a colourfully costumed two hour show full of love, laughter and lyricism and engaging characters, featuring songs set to original music – perfect entertainment for a summer’s evening.”

It will be Dyer’s 11th all-male production in a row for the Players. “It is of course totally authentic – we are following in the footsteps of Shakespeare’s own Globe Theatre when all roles were taken by men. The Players have built a reputation for strong, all-male shows over the past decade.”

The inimitable Festival Players aim to make Shakespeare accessible to all with audience comfort and attention spans in mind! Says Dyer: “Our shows are never longer than two hours and we try to make them crystal clear and an amalgam of energy, entertainment and colour. We set out to take audiences of all ages on a journey and make them feel very much part of the production.”

Café on the Rye will be manning the BBQ and serving Burgers & salads along with Chilled Wines, Prosecco, Beers & Larger. Ice creams and snacks also available.