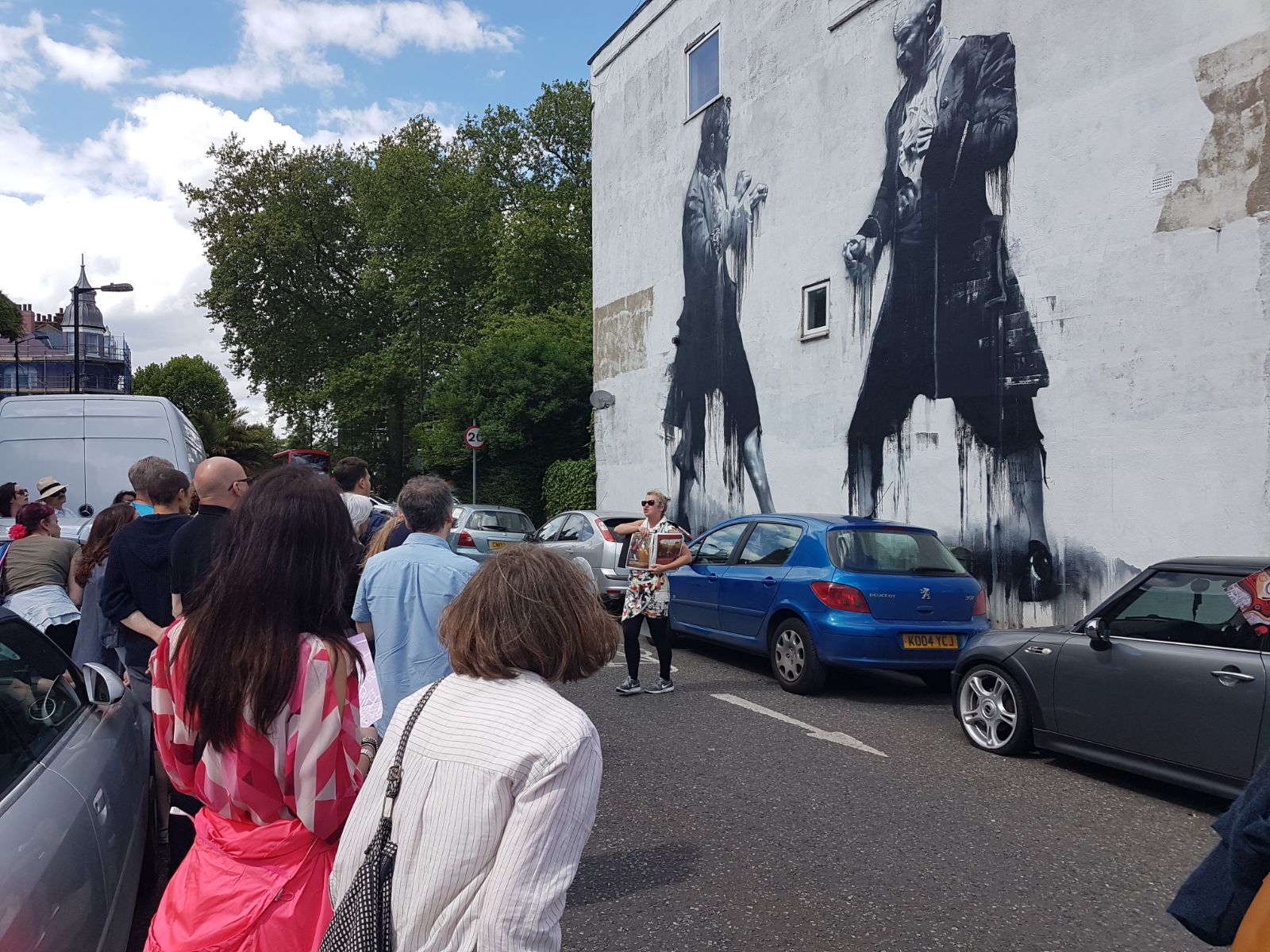 Not long after that came “Can you do Photoshop? Why don’t you join the Friends Committee?” I did and created many event posters including designing the many Bigger Picture Film Club ads. More followed from “Can you write? Come get involved in DulwichOnView!” where I wrote articles – including one on South London Street Art – to “Do you want to sing and DJ at the Gallery Lates and at my house?” The list goes on….

So no wonder then, when I was lucky to be catching up with her in the last few months, we were discussing amongst other things her Dulwich Street Art project and who would do the walks as the Festival programme had to be finalised by Christmas.

When Ingrid, always her exuberant self, had discovered Street Art after meeting British Graffiti Artist, Stik, and hearing him talk she was very passionate about this new art movement. She invited me and Stevie Henden (Stevie later ran Ingrid’s pop up Outdoor Gallery shop in Dulwich Village in the final months) to a Stik exhibition in town. I also invited Stik to present a Charity Award in 2012. My job was to find star-studded fabulous presenters to hand out the 10 awards, also that year I had invited amongst others, Sir Peter Blake – Stik had a good chat with the octogenarian! The next year the crazy Baroque-the-streets house was decorated by a global elite of street artists and I was lucky to have partied there the only weekend it was open for the launch of Dulwich Festival 2013. I met more of the artists at Ingrid’s Soho Book launch of Street Art Fine Art. Friends of mine locally knew I could introduce Ingrid to them if they had a mural request! My neighbour, Dena Blakeman, was instrumental in securing St Thomas More Hall for the new East Dulwich Picture House cinema and via Ingrid commissioned a couple of artists – Pure Evil, Roo and Chock – to paint the hoardings whilst construction was going on. I photo-documented the process throughout the day for them while it was happening. Another friend, Yolande, had scaffolding up on her house and took the opportunity of employing stencil artist Agent Provocateur to adorn her fence and eaves with 3 flying ducks. (Glengarry Road, visible from East Dulwich Grove). It seemed then that over the years I had met some of these artists at work, also I have knowledge of the old masters from the days of being a school group guide for the DPG education department. There was this void then as to who would continue the walks with enthusiasm and knowledge of both sides (the artists old and new) and as Ingrid said “I don’t want any stuffy art historian involved” then as per usual she looked at me and said “You can do it Amanda!” I specially designed this graffiti dress myself for the walks!

The next street art walk is the evening of Friday 9th June from 7pm – 8:30pm starting at Vale End (opposite East Dulwich Station) and ending up at Dulwich Picture Gallery. Tickets £10/ £9 conc via Eventbrite

Keep up to date with Street Art in Dulwich at Facebook.com/streetartDulwich