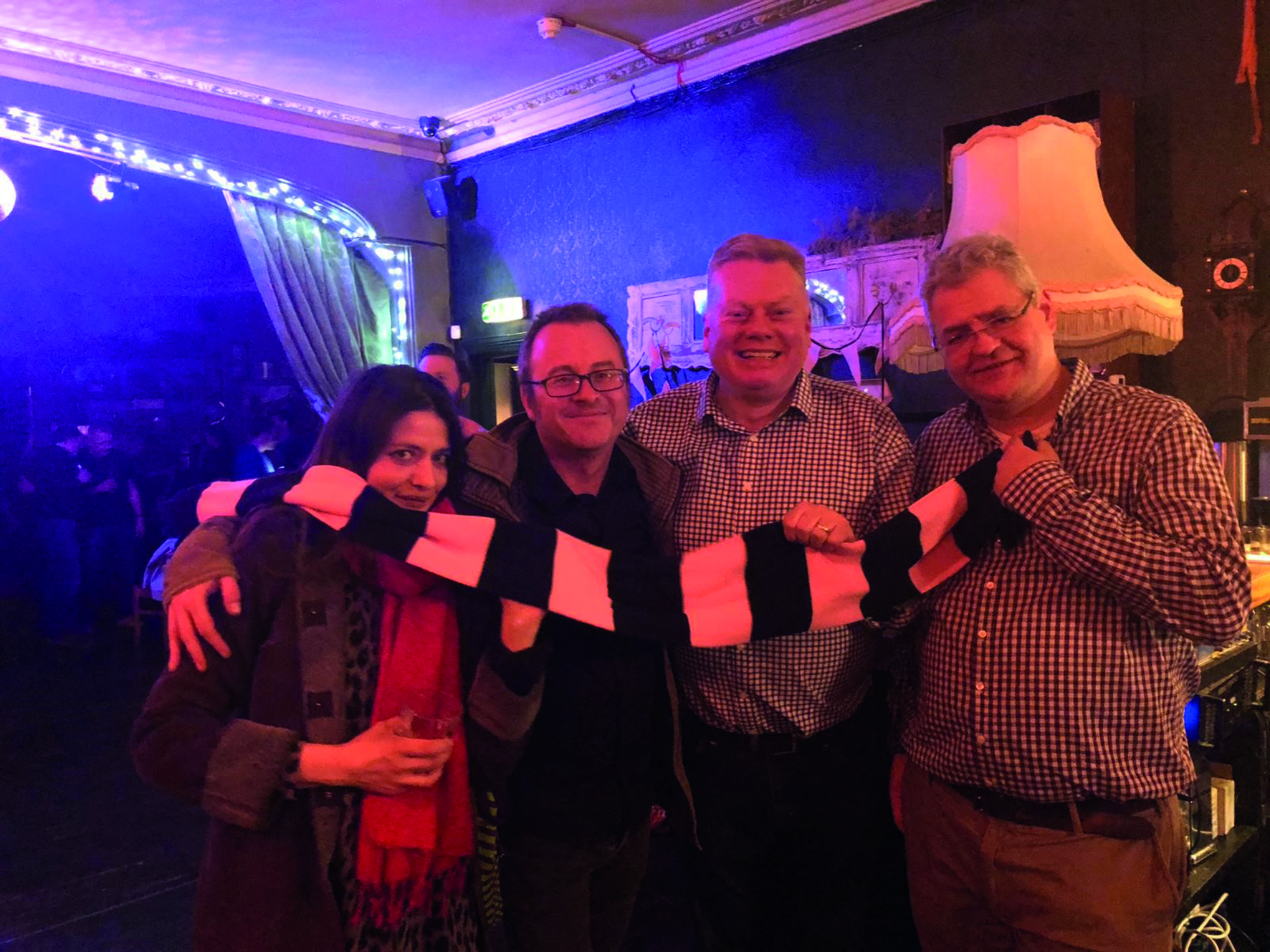 Supporters at the fundraiser at the EDT

At the time of writing, Dulwich Hamlet head into the last two weeks of the regular season sitting in second place in the league.  Sitting in second place with a play-off place now guaranteed, the team still could still finish in top spot and with it securing the one automatic promotion place on offer in the Isthmian Premier League.

The play-off’s involve the four clubs finishing just below the league winners with the Semi-finals taking place on Thursday 27 April.  The final itself scheduled to take place on May Day bank holiday (Monday 1 May).  Both the Semi-finals and Final are one off games, with the highest placed team, at the end of the regular season given home advance.  Therefore, if the team was not able to secure the automatic promotion spot by finishing the season as champions, finishing in second place could secure two home ties in this year’s play-offs.

Information on the remaining league and possible play-off games, can be found by visiting the clubs official website.

Given all the events taking place ‘off’ the pitch, the fact that the club are still one of the favourites to secure promotion to the National Conference South is an amazing achievement in itself.  If you are not aware of the current off-field issues the club has been facing this season, the current owners of Champion Hill Stadium ended their financial support of the football club in November 2017.

To make matters worse, last month, they terminated the Licence agreement that allowed the team to play on the ground that Dulwich Hamlet has been calling home for over 90 years and made public that they had Trade Marked ‘Dulwich Hamlet Football Club’, ‘DHFC’ and ‘The Hamlet’.

On Saturday 14 April, the Supporters’ Trust hosted a fundraising party at the East Dulwich Tavern to raise funds for the Club’s 12th Man fund.  The party was well-attended with great music from our DJs, prizes won in the raffle and some very good prices realised in the auction.  £2340.00 was raised on the night! Thank you to everyone who attended and we hope everyone had an enjoyable time.  We must also extend our sincere thanks to the team at the East Dulwich Tavern, Lordship Lane, for providing the venue free of charge.

Lastly, a big thank you to all the individuals and businesses who donated prizes for the raffle and auction.  The support for the football club in not only East Dulwich community but also much of the surrounding area has been nothing short of phenomenal.

Together with the Xmas fundraising the Supporters’ Trust have been able to raise just only £5,500 for the 12th Man Scheme.  The 12th Man is a long-standing scheme set up to help fund player signings for Dulwich Hamlet, this season it has now turned into our main source of funding the football club.

This article first appeared in the May 2018 issue of SE22 magazine.