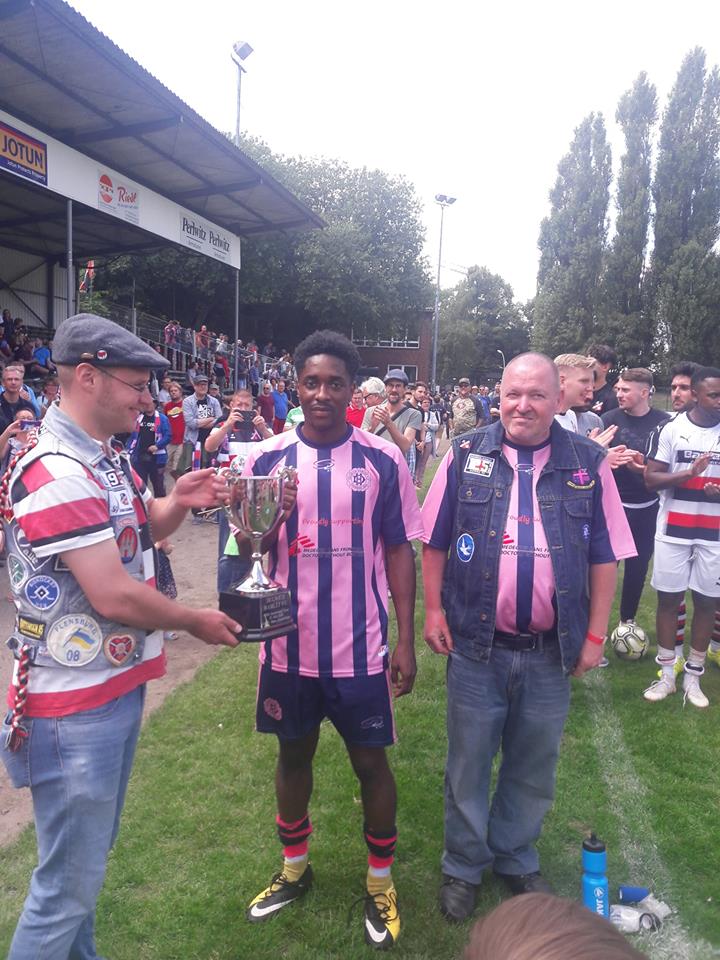 This year is the 125th anniversary of Dulwich Hamlet Football Club and throughout the year the club and supporters will be celebrating the occasion.  For this season, the club have introduced a ‘new’ club crest to mark to occasion.  Technically this is not a new crest in every sense of the word, it is actually an interpretation of the original used in the early part of the 20th century and it will appear on all team wear throughout the season.

In recent years, Hamlet supporters have formed a close relationship with supporters of Hamburg club Altonaer FC von 1893.  Altona 93, as it is more commonly known, was also formed in the year 1893 and so see’s it also celebrating its 125th anniversary this year.  As part of both clubs celebrations Dulwich’s first team squad travelled to Hamburg a couple of weeks ago to play Altona 93 in a pre-season fixture at their Adolf-Jäger-Kampfbahnground.  Just under 200 Hamlet fans travelled over for the weekend, which also saw Dulwich face HFC Falke in another friendly a few days earlier.  Dulwich ran out 4 -1 winners (not that the final result mattered) in a match witnessed by 1,093 spectators. This is the third meeting of the clubs, with the most recent fixture taking place at Champion Hill in July 2015.  Ironically, the score for the first meeting of the clubs in Germany was a 4  – 1 win to The Hamlet!

This season will finally see Dulwich Hamlet competing in the National League South. Throughout last season Dulwich challenge Billericay for the league title, but had to settle for promotion via the play-offs by wining the final at ‘home’ on penalties in front of 3,300 spectators.   The community of SE22 is now well aware of the current situation of the team having to play away from its home in East Dulwich, the first season in the National Leagues will see the team continue to play at nearby Tooting and Mitcham’s ground.   No progress, with getting the team back to Champion Hill, has been made with Meadow (the current owners of the land the stadium sits on) seemingly unwilling to budge unless Southwark Council agrees to their development proposals for Champion Hill stadium and the surroundings area.

Following promotion, Gavin Rose and his coaching team have managed to retain the majority of the squad from last season.   A number of players have moved on, including a few fan favourites, but following several pre-season games the players brought in will certainly add some quality to the squad.

The first league game of the season saw the team travel to local club Welling United on Saturday 4 August, with the first home fixture the following Wednesday evening.   Admission prices for Home games for the 2018/19 season are; £12 adults, £5 concessions and under 13’s FREE.

Further details on how to get to the ground can be found on both the Supporters’ Trust website (dhst.org.uk) and Club (dulwichhamletfc.co.uk) websites.