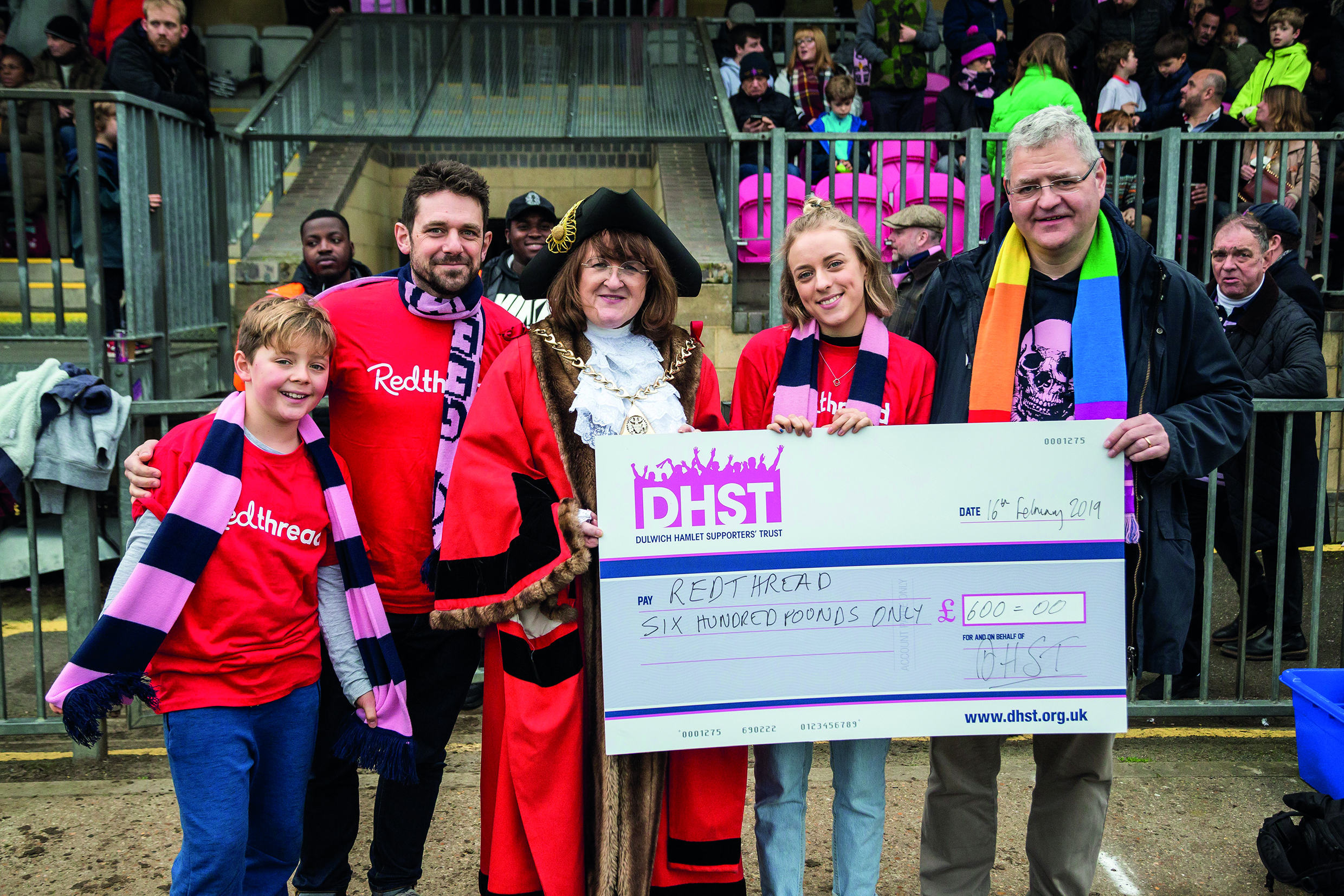 Dulwich Hamlet is now at the business end of their first campaign in the National league South.  Recent form has seen Gavin Rose’s team stabilise their league positon just outside of the relegation zone, a good set of results this month could secure the clubs place in this league for the 2019-2020 season.

Crowds of 2,500+ have been witnessing the squad finally reaching the form that secured promotion via the play-offs last season.  Most supporters, at the start of the season, would have agreed that the two main goals would be seeing the club return to Champion Hill and retaining its place in this league.  The clubs been back in East Dulwich since Boxing Day and fans are backing players will complete the other goal on the pitch.

Following the success of last season’s limited edition scarves celebrating LGBT History Month, the Supporters’ Trust produced another ‘Rainbow’ Pride Flag inspired limited edition scarf.  These went on sale at the home game against Welling United on 9 February.  Most of the 200 scarves were snapped up at the game, with the remaining dozen sold the following Tuesday when Dulwich lost their London Senior Cup Semi-final tie 1 – Nil against Brentford B.

The sale of these scarves raised £900 which was divided between two LGBT+ football charities, Football v Homophobia and the Gay Football Supporters Network.

In addition to raising money, supporters will now be proudly wearing these colours to work, down the local bar or going out to the local shops.  It shows the local LGBT+ community that they are always welcome at Dulwich Hamlet, unfortunately discrimination still exists within some football stadiums despite it being 2019.

The recent visit of Hemel Hempstead Town, to Champion Hill, marked the football clubs charity partner day and saw the team playing in a ‘one off’ pink and red shirt.   The football club then auctioned off these special shirts after the game, with the proceeds going to this year’s club charity partner Redthread.  Redthread a youth work charity aiming to support and enable young people in south London to lead healthy, safe and happy live.  As part of the day, the Supporters’ Trust presented Redthread with a cheque for £600.  This money was raised by those attending this year’s Trust Christmas Party, thanks again to all those who bought raffles tickets and bided in the auction on the night.

Fixtures at Champion Hill in March (all 15:00 kick offs):