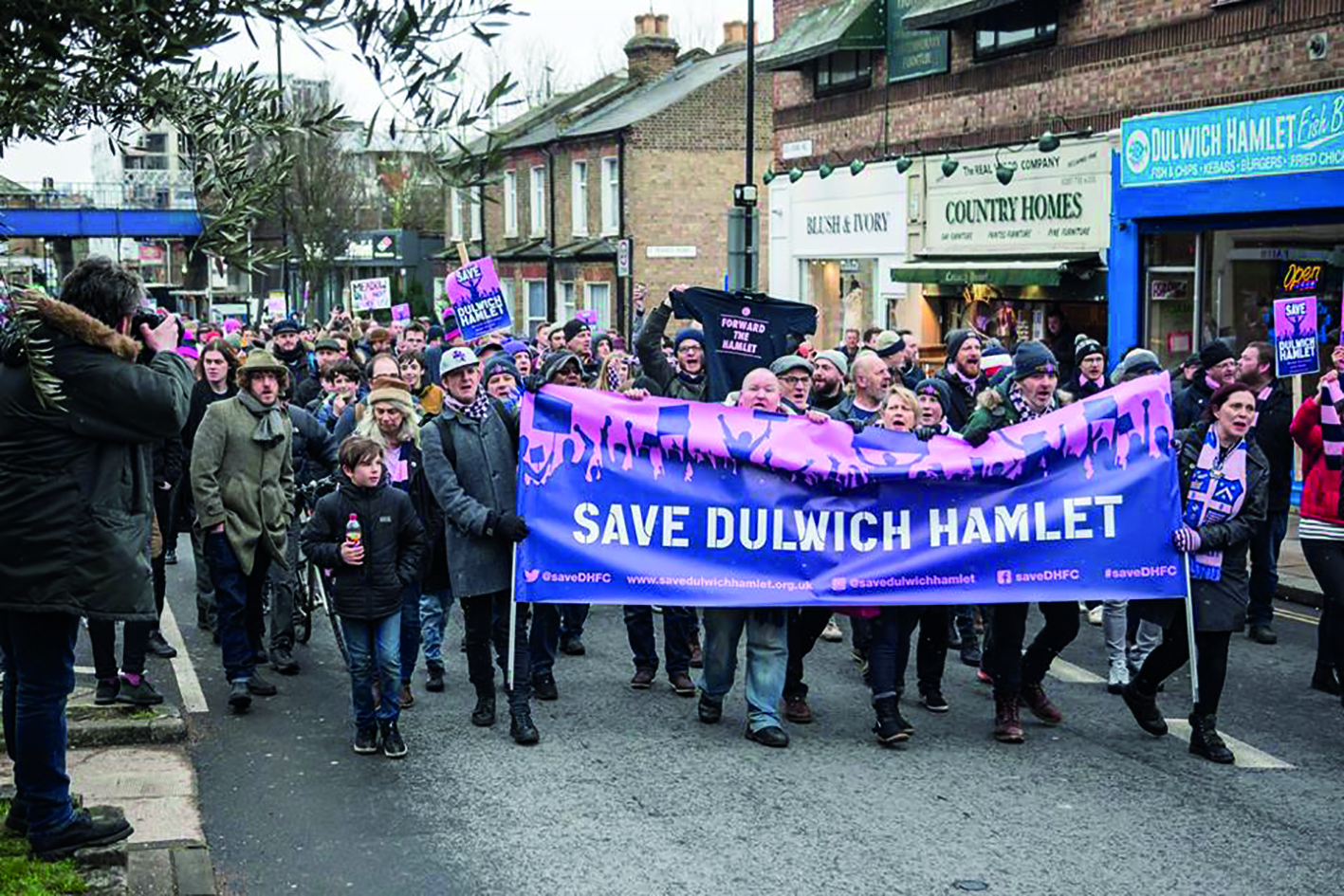 The 17th March 2018 will be a day that will live long, not only the memory of Dulwich Hamlet supporters, but also the local community of East Dulwich.

If you are not aware, owners of the land (Meadow Residential LLP) that the Champion Hill stadium lays upon, have not only (with immediately effect) ended the club’s licence to play at the ground, but also made public that they have trade marked a number of names associated with the 125 year old football club including the name ‘Dulwich Hamlet Football Club’.  Therefore stating that the football club is cease using the name.

Being ‘locked’ out of our ground, home since the 1920’s, resulted in the team now having to play home fixtures at Tooting and Mitcham’s ground 8 miles away.  At the time of writing two ‘home’ games had taken place, the most recent one taking The Hamlet back to the top of the league.

Back in November, Meadow informed the football club that they would no longer be financing the club.  Since then supporters have been digging deep into their own pockets to keep the club alive through its 12th Man scheme  All that money is being used exclusively to pay wages and other bills. While heart-warming, it cannot be a sustainable approach forever.

Following the latest actions by the owners of the Champion Hill site, a number of supporters have set up an action group called ‘Save Dulwich Hamlet’.  Initially set up to organise a rally and march from Goose Green to the football Stadium at the end of Edgar Kail Way.

Alongside the Supporters’ Trust and Football Club Committee, supporters are making their voice heard on the club’s future in a number of different ways.

On 16 March around 30 Dulwich Hamlet fans descended on the House of Commons to watch an adjournment debate on the future of the club, called by one of our local MPs, Helen Hayes, who has tirelessly campaigned to save the football club.  Days before Southwark Council announced that they are now seeking to purchase the Champion Hill site from Meadow with the intention of building much need council housing around the ground.  Both events are really positive actions in helping to secure the future of the club.

Within 24 hours up to 1,500 Dulwich Hamlet fans gathered on Goose Green for a rally organised by the Save Dulwich Hamlet.  After hearing a number of speeches that included  local MP Helen Hayes, Trust Chair Al Crane and lifelong supporter Mishi Morath, supporters marched to the Champion Hill ground turning Grove Vale Road into a sea of Pink and Blue.

The club and its supporters have been very active in the local area, helping local schools and charities, and we can promise you that will not change as long as it remains alive. It is an intrinsic part of the community and the rally on the 17 March 2018 showed just how important this football team is the local community.

Things in East Dulwich are changing on a regularly basis and who knows by the time you are reading this article the team could be back at playing back at Champion Hill.

Further information on upcoming fixtures, location and the latest information on the clubs situation can be read on the football clubs official website.

This article first appeared in the April 2018 issue of SE22 magazine.