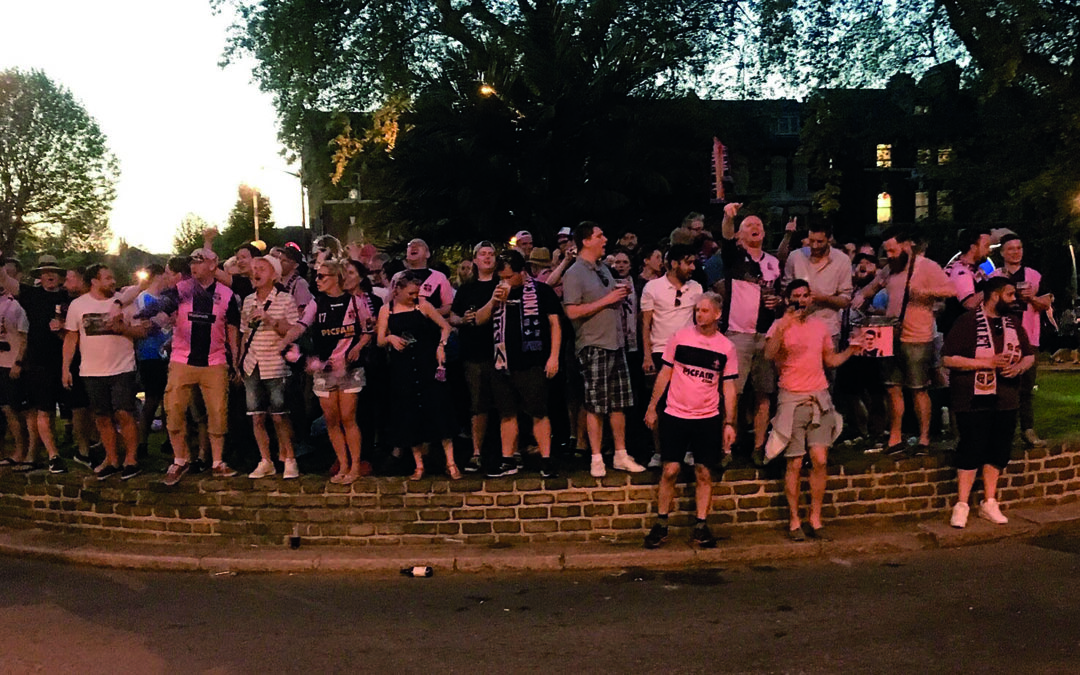 For your average Dulwich Hamlet fan May Day fires-up the synapses like no other, evoking memories of play-off finals past. Our thoughts turn to the over before you’d downed your first pint defeat to East Thurrock on the wild and windswept wastelands of Essex. And then to the close but no cigar loss to bogey-team Bognor “Bugger” Regis. But on this year’s miserable mizzly May Day, our mind’s eye sought solace in recollection of that balmy blaze of an afternoon in 2018, where, in the boiling broiling backwater of our Mitcham home in exile, the Pink and Blues finally ascended to the Conference South.

Three thousand Rabble invaded the pitch that day in barely believing delirium as Dipo’s winner billowed the back of the onion bag.  And then half of East Dulwich headed to Lordship Lane and spent the evening whirling around the freshly christened Promotion Roundabout, drinking the EDT dry, and laying the foundations for the mother of all happy hangovers. Oh what joy when we have Edgar Kail in our hearts.

Such days will of course return.  But football at the Hamlet’s level is on ice for the remainder of the season.

The signs of a thaw though are there. The Dulwich Hamlet Women’s team for one have buffed up their boots and bedaubed the embrocation and are gracing the hallowed Champion Hill turf once more. Behind closed doors as things stand, with only a few stewards and ball returning officers as witnesses.  It is possible, just possible, that crowds will be allowed to return this season to see the women. So keep an eye of the club’s website (www.dulwichhamletfc.co.uk) for updates.

In the meantime, there’s a lot of work going on behind the scenes, making sure the club is ready to rock when we get back to something approaching normal.

You can do your bit to help. Why not join or donate to the Dulwich Hamlet Supporters’ Trust for one. Founded in 2002, the Trust is an independent, democratic organisation which exists to support a successful and secure future for the Hamlet, while giving a voice to the Club’s supporters. In the last three years the Trust has invested around £60,000 in the Club, the majority of which has been used to buy a significant stake.  Take a look at the Trust’s website at www.dhst.org.uk to see how you can join.  And while you’re there, check out the mega sale of replica shirts.

Benvenuti in Toscana and Up The Hamlet.