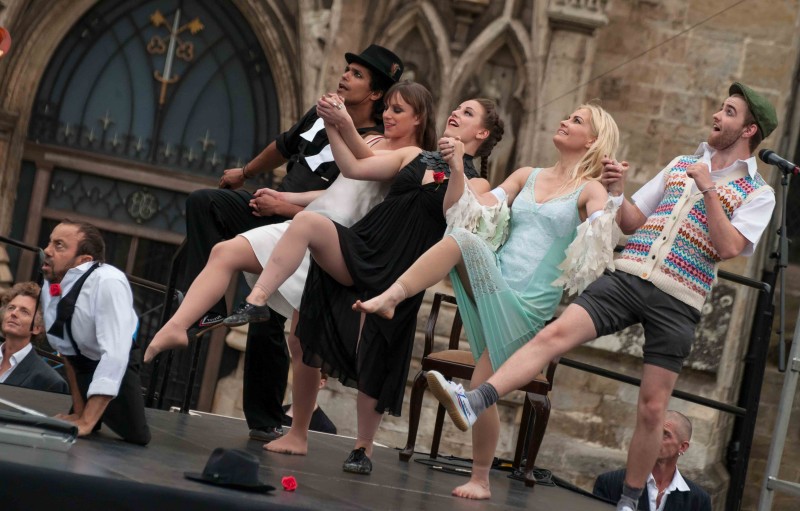 From national treasures to the latest improv act tearing up Edinburgh Festival, the 22nd annual Dulwich Festival is running from 8-17 May and promises a spectacular programme that reflects the varied cultural tastes of the local population and beyond.

The programme is bursting with wonderful music, stimulating literary and theatre events, amazing art in the Artists’ Open House and a whole array of excellent walks and fairs. The Food Trail highlights just some of the exciting food producers and retailers in our community. Dulwich Festival is produced by the community for everyone’s enjoyment.

Some highlights this year include:

What’s on this weekend:

For those whose musical tastes are rooted firmly in the present, the Festival offers a chance to see some of the best established and upcoming folk and indie talent in special local venues. London indie folk band Joe Innes & the Cavalcade have built up a reputation for lively and energetic live shows that garner praise from the likes of Steve Lamacq on BBC Radio Six. See them perform Upstairs at the EDT on Lordship Lane, East Dulwich on Friday 8th May at 8pm and prepare for a foot-stomping, hand-clapping experience.

Presented by Southwark Council, Dulwich Park will see the premiere of Weighting on Saturday 9th May at 2pm and 7pm; an incredible circus performance by Extraordinary Bodies, the UK’s first integrated circus company showcasing disabled and non disabled performers. Weighting fuses music, circus, and dance and theatre into a 45 minute show with a beautiful musical score written by Dom Coyote (Kneehigh, BAC) and Ted Barnes (Beth Orton). The music is played by a five piece band and includes a finale song sung by a 100 strong integrated locally recruited choir.

For those Londoners who want a taste of the comedic offerings at the famous Edinburgh Festival without the hours-long journey, hop along instead to South East London where the Dulwich Festival this year provides some of Edinburgh’s best new talent.  A comedy double bill of Liam Williams and Johny Pelham promises a glimpse of the best new acts on the circuit when they take to the stage at MCT in Alleyn’s School at 8pm on Saturday 9th May, with Liam Williams presenting his acclaimed ‘Capitalism’ show. Nominated for a Foster’s Edinburgh Comedy Award, it is an erudite, eloquent hour about Generation Y angst and was described as ‘An intelligent, brilliantly funny and densely layered show’ by The Independent. Supporting Liam will be Jonny Pelham, nominated for Chortle Best Newcomer and judges choice in the BBC New Comedy Awards.

Fun for all the family is on offer with the tenth annual Festival Fair on Goose Green on Sunday 10th May.  Now in its 10th year the Festival Fair will bring together a selection of the best craftspeople, designers, independent shops, family fun, bars and cafes from East Dulwich.  The event is designed to be a fun, non-profit making day for all the community and will be widely marketed as such.  There will be lots of activities to encourage people to spend plenty of time at the fair; bouncy castles and face painting for children, a beer tent (provided by East Dulwich Tavern), delicious food stalls and other entertainment including donkey rides! Appearing this year on The Goose is Out! stage are Pepper & Shepherd, The Wayne Drury Project,  Louis Vann Johnson & The Indi Souls and John McClean & The Clan. Live music starts midday!

Adam Norsworthy is best known as the lead singer and guitarist for popular blues band The Mustangs, and is a well respected face on the British blues and folk circuit in his own right given the critical acclaim attached to his six solo albums. See him give an intimate performance amongst the luxurious surroundings of Belair House, Gallery Road, SE21 on Sunday 10th May at 8pm.

The Artists’ Open House returns to the Festival for its eleventh year, running across both weekends of the Festival (10th-11th and 16th-17th May). Artists’ Open House continues to attract a rich and varied assortment of art including painting, photography, ceramics and much more – the perfect excuse to add to your art collection at home. When tummies start to rumble after pounding the pavements, offerings from some of Dulwich’s best loved food stores and restaurants come to the rescue as part of the Festival’s Food Trail.