Debut literary novel by local author, David Sanger, is out this week 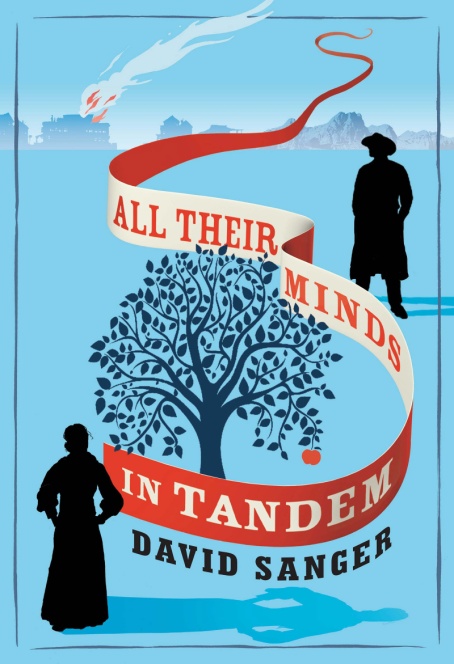 All their Minds in Tandem is the debut literary novel by local author, David Sanger.

A comic masterpiece, it is a hugely entertaining and tightly woven novel that explores the unreliability of memory. What would happen if we could control our memories and replace them in order to change who we really are? And if we’re able to replace our memories then we can reform our own past in the present?

New Georgetown, West Virginia lies in the shadow of the Civil War. Despite the 14 years that have passed since its end, the aftermath of the conflict means the town is half-built and the lives there half-lived.

Into the midst of the townsfolk comes The Maker, a curious stranger whose business is memories. He can help you forget, make you remember, or release you from your most secret inhibitions.  The Maker’s arrival sets in motion a series of events that will change the town and its  people forever.

Dr Umbründ, the pint-sized physician with a prodigious capacity for sin is looking to build a reliable past.  The three sisters on the hill, Blanche, Elena and Kittie Marianne, each striving to replace a family forever lost. The painfully shy Odell, whose dreams and ambitions are crushed again and again, wants only to be accepted, while his beautiful sister Ora suffers the roving eyes of the townsmen only so she can be free of her family’s past. The tavern’s mysterious landlady “The Bird” fuels the townsmen’s fantasies with her spellbinding music, but refuses to reveal her identity to anyone and Clay, New Georgetown’s lead cad and chief alpha male, will take anything and anyone he wants until he meets The Maker.

Before writing All Their Minds in Tandem, David worked at Faber & Faber looking after PD James, Seamus Heaney, Kazuo Ishiguro and Peter Carey who he says were incredible at talking to him about their own techniques and the writing of other authors. David moved to Berlin to write the novel and says that Germany’s conscious attempt to remember their difficult history inspired him to explore how the past can be re-formed in the present.

David studied drama at LAMDA and says that lessons in impersonating and constructing a character have influenced his writing. David still acts and is a member of the Dulwich Players, with whom he has performed at the RSC outdoor theatre in Stratford-upon-Avon in front of Judi Dench. David is a self-professed film buff and is a regular contributor to Sofilm Magazine.