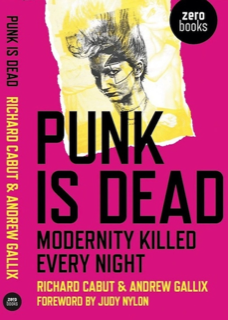 On Saturday 9th February from 3pm-5pm, there will be a punk literary event, titled simply Punk Rock Special, organised by Crofton Books, hosted by the Crofton Park Community Library, for which the event is a benefit.

This will be part of that weekend’s annual London Book Crawlin support of independent bookshops, including Crofton Books.

The event is centred around the acclaimed book Punk is Dead: Modernity Killed Every Night (Zer0 Books) by local author Richard Cabut.

It will feature readings from the book by Richard Cabut and other contributors, as well as local poets and original punk rock luminaries. There will also be a Q and A session.