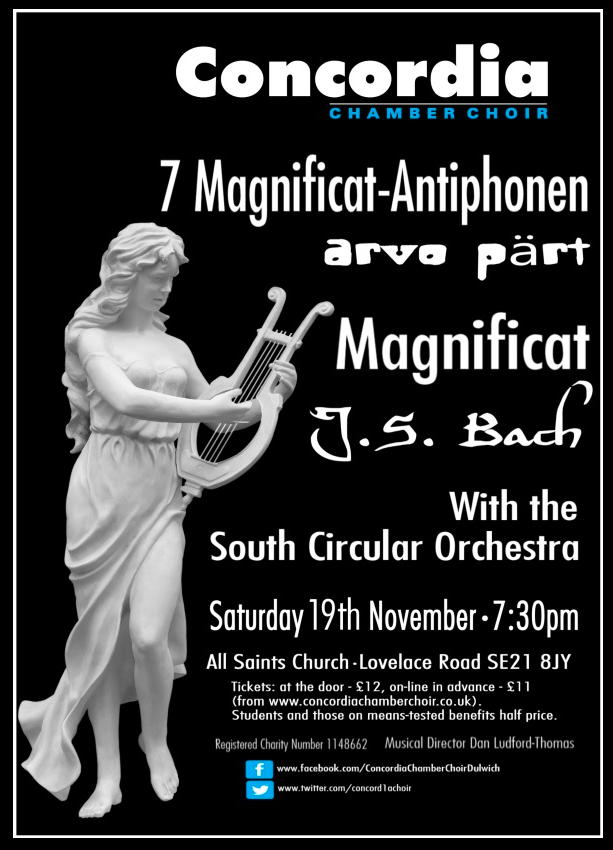 For their autumn concert, the Concordia Chamber Choir is proud to bring together, in exciting combination, two composers of the first rank. One is a household name, the other slightly lesser known; one from the 18th century, the other still alive in the 21st.  What links Johann Sebastian Bach and Arvo Pärt is their miraculous musical interpretations of the scriptures.  The first half of the concert will feature several of Pärt’s dynamic, contemporary religious pieces including a Magnificat and Nunc Dimittis; the second is taken up with Bach’s unique, magisterial Magnificat in which the choir will have the great pleasure of being accompanied by the South Circular Orchestra.

We hope you’ll be able to join for an evening of soaring beauty and deep spirituality which will confirm, once again, Concordia’s reputation as one of south London’s most prestigious choirs.

Tickets for CCC’s 2016 Autumn Concert cost £12 at the door, or £11 in advance. Concessions (students and those on means tested benefits) half price.