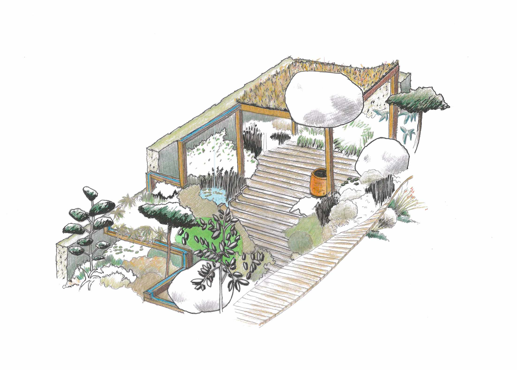 Rugged Icelandic landscapes, a Buddhist sense of oneness and the Venetian architect Carlo Scarpa have come together in unexpected horticultural harmony to provide the inspiration for The Garden of Potential, designed by Propagating Dan, the professional name of Daniel Bristow, a young(ish) South London garden designer.

The five-tonne glacial boulder balances precariously on the roof of an oak pavilion, directly above a ceramic sculpture by contemporary artist Jesse Wine. An ‘elaborate gutter’ architecturally zigzags through the landscape, capturing a rainstorm’s potency in a gurgling rill.  A path, inspired by a collapsed fence in Propagating Dan’s front garden in Peckham, South London, almost tips the visitor into the space.

Rarely used- and often derided- plants predominate: the maligned majestic field horsetail, Equisetum arvense, will architecturally weave its way through a lush and unusual woodland planting scheme. The sometimes scorned golden leylandii, in all its sculptural neon beauty, makes a focal point. Other standout plants include rare umbrella plants (Schefflera sp.), and the ghost flower, Diphylleia grayi, the flowers of which turn transparent when moistened by rain.

This garden, while serene, lush and a space for contemplation is, at the same stroke, teeming with ideas.

“The Garden of Potential has a multitude of influences; from the inherent energy held within boulders that perch on Snowdonia’s mountainsides, to the idea of oneness in Buddhist teaching, to Icelandic dew-spattered meadows.  What this garden won’t have is a theme.  I believe a design should be praised or critiqued on its own merits and I want this garden, as any I design, to provoke a response in the visitor without the necessity of a guidebook.”

Propagating Dan is working work closely with Anthony Tavernor of Plas Cadnant Hidden Gardens and specialists Sue and Bleddyn Wynn-Jones of Crûg Farm Plants. The boulders are to be lent to the project by GreenWood Forest Park, an award-winning eco-adventure park in North Wales run by (Dan’s parents) Stephen and Andrea Bristow.

Daniel grew up in a horticultural household in Sudan and on Anglesey, North Wales, learning all the plants in the hedgerow by a young age. He started his own garden design business in 2008 and studied horticulture at Capel Manor College in 2009.  He has designed gardens in London, over the UK and internationally.

ABOUT SUE AND BLEDDYN WYNN-JONES

RHS Gold medallists Sue and Bleddyn Wynn-Jones are amongst the most important plant hunters working today.  They have made over 16,000 seed collections over some 50 expeditions, providing an invaluable contribution to plant science and conservation today.  They have scaled mountains and volcanoes, explored hidden canyons and dodged armed bandits (much like Dan himself!), to seek out elusive specimens.  They work closely with government agencies, Royal and Botanic Gardens and National collections across the world. www.crug-farm.co.uk

In 1996, former farmer Anthony Tavernor, bought a run-down four-hectare estate at Plas Cadnant on the Isle of Anglesey.  He has spent the last 20 years painstakingly restoring and transforming the site.  Its woodland walks, streams and waterfalls and superb formal gardens welcome visitors both nationally and internationally. www.plascadnantgardens.co.uk

Jesse Wine, (b. 1983, Chester, UK, based in New York) gained his BA Fine Art at Camberwell College of Art (2007) and his MA Sculpture at the Royal College of Art (2010).  He exhibits widely, nationally and internationally.  www.jessewine.com | www.limoncellogallery.co.uk/artists/jesse-wine/