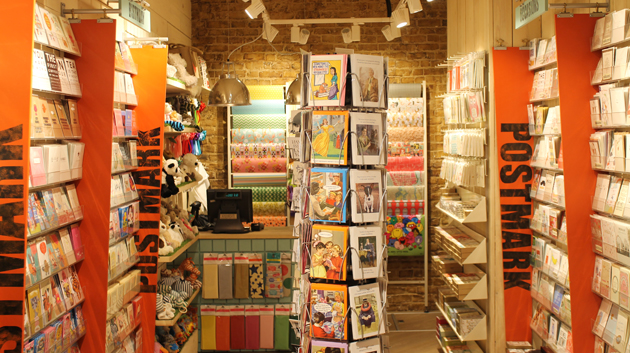 That’s the question on everyone’s lips at independent, award-winning, East Dulwich card shop ‘Postmark’ this December as they launch a campaign to find and celebrate their one millionth customer.

Since opening on North Cross road in 2009, this neighbourhood favourite has sold hundreds of thousands of cards celebrating everything from anniversaries to birthday’s and welcomed increasing numbers of loyal local shoppers keen to support their high street and the business and jobs that depend on them.

Now, in the run-up to and over the Christmas season, Postmark are set to serve their one millionth customer, a sign of the strong growth of independent shops in the area which looks set to continue.

To celebrate this massive milestone they will be playing Santa and giving away an amazing array of goodies to three lucky customers – the one millionth and those customer’s nearest to the big number in their other two stores.

The big bag of goodies for the winners, which has been sponsored by top card and stationery brands Caroline Gardner, Pigment and Art File, will include stacks of cards for every occasion, social stationery for adults and children as well as notebooks and pens.

With thousands of customer’s expect to shop at Postmark East Dulwich and their two sister sites – Postmark Balham and Postmark Chiswick – over the festive rush the location of the millionth customer is impossible to predict and the prize could be taken by a customer at any of the Postmark stores.

Mark Janson-Smith, owner of Postmark, said: “I’m so excited about finding and celebrating our one millionth customer. It’s such a huge moment for our business and we owe it all to our fantastic customers who have loyally supported us over the years, helping us and other independents on the high street to thrive.  With three stores serving lots of people in the run-up to Christmas it really could be anyone. Our staff are keeping a very close eye on the numbers and can’t wait to be the one to hit the jackpot.”

High streets are vital to the capital’s economy. Outside of central London over half of London’s jobs, and 47 per cent of businesses, are spread across almost 600 high streets. Two thirds of Londoners live within a five minute walk of their high street and almost half don’t leave their area on a daily basis.

Postmark operates an integrated till system which notes each sale. The lucky customer will be told of their win when they pay for their purchase – so watch out it really could be you.