All the fun of the Love West Dulwich Spring Fair 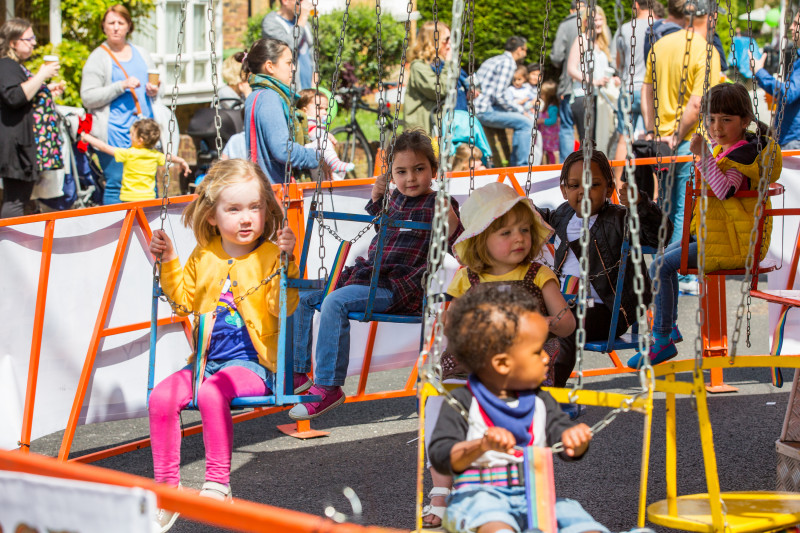 Love West Dulwich held its first Spring Fair on Saturday 16th May as part of the annual Dulwich Festival with fair rides, arts and crafts stalls, maypole dancing, street food markets, farm animals and live entertainment taking over the streets of West Dulwich. Working in partnership with the Dulwich Festival this was a community event at its best with hundreds of local residents and those from further afield joining in and soaking up the atmosphere.

Local businesses also put on special activities, flower pot painting at The Dulwich Trader was a big hit, as were the workshops at the Alleyn Park Garden Centre and the Sari workshops at Jaadu. Cricket enthusiasts entered the prize draw at Thomas’s Schoolwear hoping to win the signed England bat and to help everyone through the day Jo Partridge was handing out goodie bags and free prosseco to all. On Rosendale Road customers were entertained by Swing Dance Taster Class with Swing Patrol, music from Hey Zeus, a visit from a local fire engine, drama workshops with Paper Chain Theatre and with free fact painting and games at Wigwam.

West Dulwich (SE21), situated around Rosendale Road and the crossroads of Park Hall Road and Croxted Road is a vibrant collection of over 20 shops, many independent and award winning. The Alleyn Park Garden Centre was picked by the Independent newspaper as the best garden centre in London, Dulwich Books were voted the best independent bookshop in the UK & Ireland in 2014 and The Dulwich Trader regularly wins the best small retailer of the year within their industry awards. The array of independent shops include Wigwam, Scotch Meats, Jaadu, Thomas’s Schoolwear, Jo Partridge Hair & Beauty, Italian deli La Gastronomia, Belmont Dry Cleaners & Half Moon Studios.

The fair provided space to local charities free of charge to help raise awareness of their businesses such as Dulwich Helpline, l’Arche, Athol House, Foodbank and Evelina Children’s Hospital, The Metropolitan Police, St John’s Ambulance and London Fire Brigade also had a presence on the day.