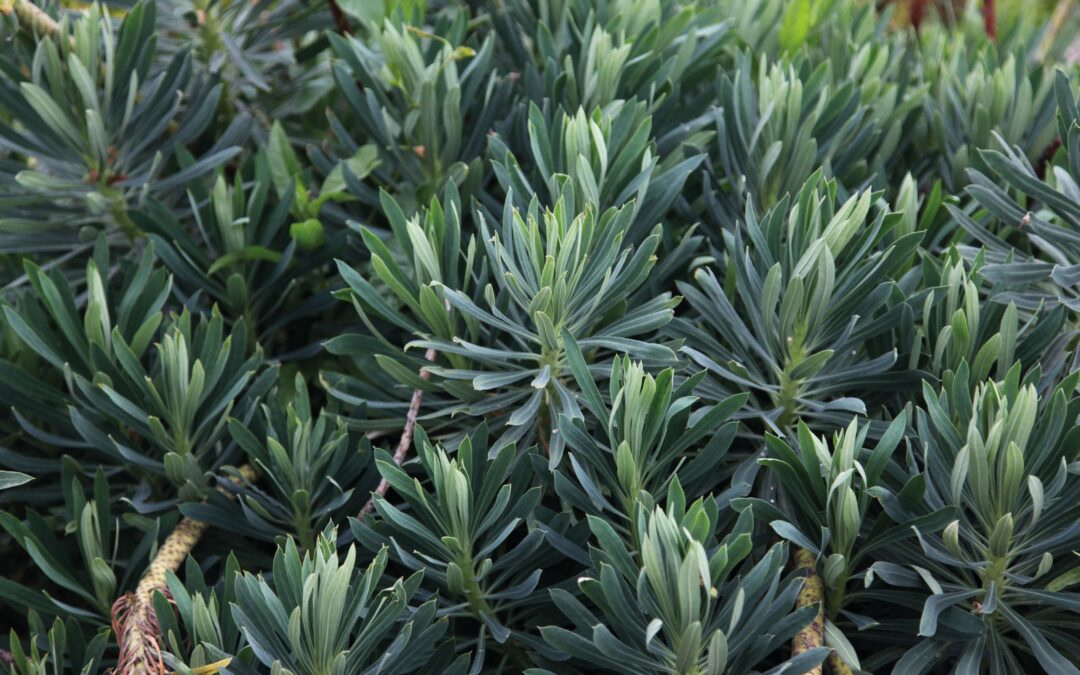 With summers generally getting hotter, it makes sense to use plants in the garden that once established won’t need regular watering. Beth Chatto’s gravel garden and the RHS Hyde Hall’s dry garden, both in Essex, are fantastic examples of drought-tolerant planting. This kind of planting is especially useful in front gardens that get watered less, or south facing gardens. Drought-tolerant plants often originate from hot, dry environments and have adapted in different ways to cope with the conditions. They also tend to like well-drained soil, so add grit or sand to clay soils.

Sedum store water in their succulent leaves and most love hot dry conditions. Tall upright varieties are a great addition to the border with their large flat flower heads turning glorious shades of pink in late summer/autumn. Sedum ‘Autumn Bliss’ is a vigorous variety with flowers that gradually turn from pale green to deep red while S. Matrona has striking purple stems and pale pink flowers andSedum ‘Purple Emperor’ is a dusky purple sedum with pink-red flowers. Carpet forming sedum varieties such as S. tetractinum are great for containers and also produce attractive flowers.

Some plants, often those originating from dry rocky Mediterranean conditions such as lavender and rosemary have tiny aromatic leaves for reduced evaporation, and keep cool by releasing essential oils. Lavender varieties such as the popular compact L. angustifolia ‘Hidcote’ with dark purple flowers is a good drought tolerant choice. Other herbs such as thyme and rosemary also cope with dry conditions.

Other means of adaptation include bearded Iris which store moisture in their rhizomes making them fairly drought tolerant once established. Make sure the rhizomes are on the soil surface in full sun. I. ‘Black Swan’ is a sumptuous dark purple variety and I. ‘Jane Phillips’ is a pretty pale blue variety. Finally plants such as Gaura lindheimeri cope with dry conditions by having long taproot. The airy spires of flowers on this perennial go on into autumn. Another example of a plant with long tap roots is Euphorbia. E. characias, which originates from the Mediterranean and once established copes well with drought.