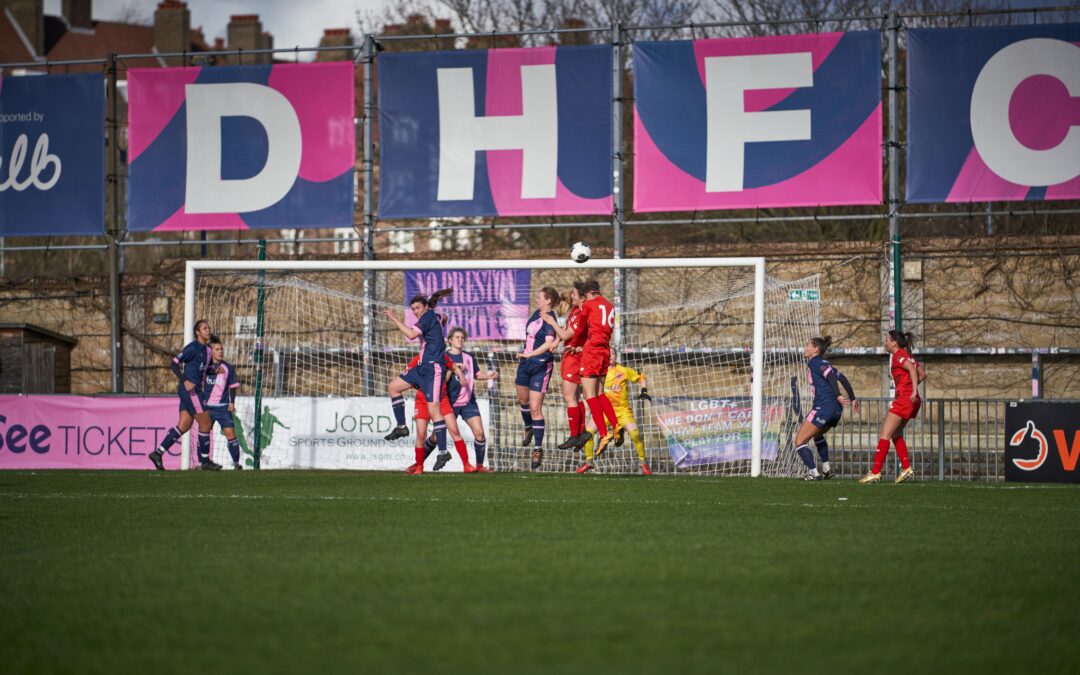 The Hamlet have assembled a young squad for the new season, with many new faces brought in and with some old club favourites retained – including Danny Mills, Charlie Grainger and Quade Taylor. With long serving manager Gavin Rose remaining at the helm, hopes run high that the Pink and Blues will give us a solid and stress-free season.

After seeing off Corinthian Casuals on penalties in their first competitive game, the pride of East Dulwich have continued to progress through the FA Cup qualifying rounds; squeezing past Wessex League side Christchurch, a match broadcast live on the BBC iPlayer. If we can beat Eastbourne Borough away on 24 October, then for the second season in succession Dulwich will be in the First Round proper. Meanwhile, The Hamlet also kickstarted their third season in the National League South, drawing 1-1 away against Kentish Galácticos Ebbsfleet United. Heady days.

Unfortunately fans’ hopes that we would be allowed to watch The Hamlet’s brand of sexy football in the flesh is not to be, with the Football Association deciding that elite clubs, such as Manchester City, Liverpool and indeed Dulwich Hamlet cannot have fans in attendance either home or away for the time being.

We are all rather grumpy about this. Champion Hill in autumn is a beautiful place, with golden leaves strewn across the terraces and Greendale’s setting sun blinding opposition goalies. But while there seems little prospect of any change in this proscription before Christmas, there are reasons to be cheerful. One, two, three.

One: all Hamlet home games will be streamed free by our brilliant media team on the club’s You Tube channel. A lot of clubs at our level are charging for live feeds. But the club have decided it sits better with our community focus and inclusive ethos that free access is the best way for us to continue to reach out.

Two: our brilliant women’s team are allowed to play in front of live crowds. DHWFC have got off to a flyer this season, humbling teams such as Margate and Hackney in the FA Cup qualifiers and laying down strong foundations in the league. So watch out for match notices on the Hamlet website (matches tend to be on a Sunday) and get down to Champion Hill to cheer them on

Three: with Christmas approaching, Dulwich Hamlet’s wide selection of club merchandise remains available, via the Supporters’ Trust website or from the mega-container at women’s home games. From bucket hats to baby bibs to replica shirts, what better gift could you think of for your loved ones.

Finally, congratulations to Hamlet fan Andrew Morris completed a 12 day 262km fundraising walk in Portugal in memory of his late father Ralph, who played for the club in the 1950s. All the money Andrew raises will benefit our local community, through The Kail Foundation, the charity affiliated to the club set up to fund the club’s activities within the local community. You can still donate by visiting Andrew’s fundraising page here

Keep an eye on the club website for news and fixture updates. And Up The Hamlet.