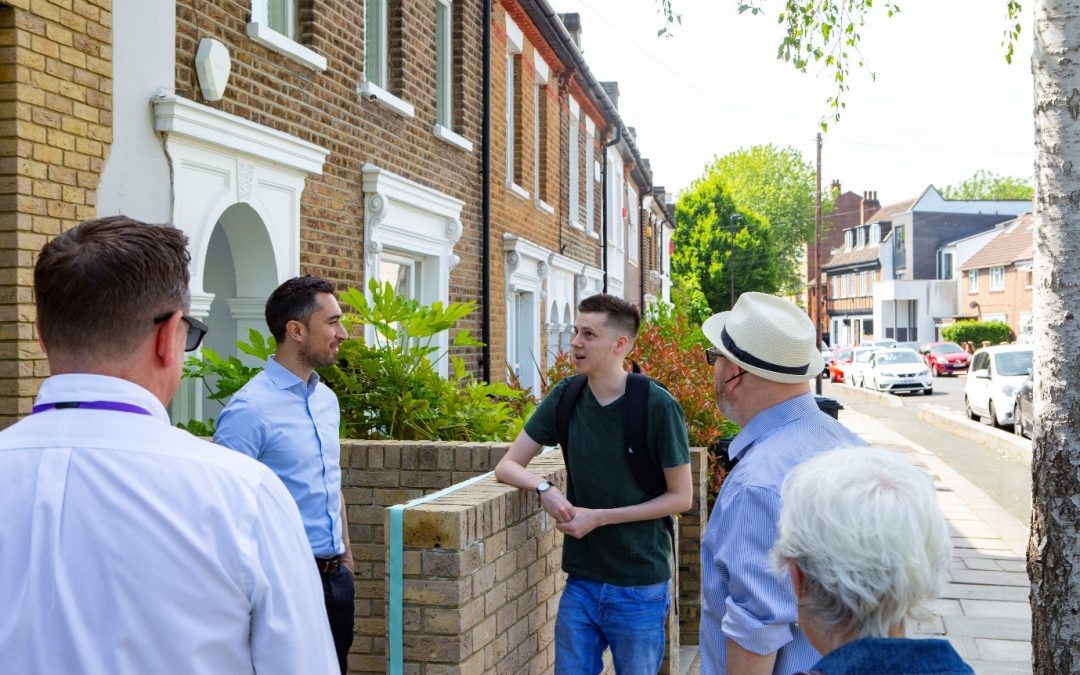 Mayor of Lewisham celebrates the completion of new social homes for people with autism, as part of the Council’s Building for Lewisham social housing programme.

Yesterday, Damien Egan, Mayor of Lewisham, and Councillor Paul Bell, Cabinet Member for Housing and Planning, welcomed new residents at a recently completed independent living housing scheme in Forest Hill. This scheme provides four new social homes for young adults with autism, allowing them to live independently away from their families, often for the first time in their lives.

Working with the Campaign in Lewisham for Autism Spectrum Housing (CLASH) and Birnbeck Housing Association, Lewisham Council helped support the scheme by donating the land and providing £133k of Section 106 funding. These new homes will help improve provision in the borough for adults with autism and make a transformative difference for the new residents moving in.

One of the new residents, Zachary, who had previously been living with his mum and sister in Brockley, showed the Mayor and Councillor Bell around his new home. Zachary expressed his delight over moving in, describing his experience of living independently as “a real confidence booster. I always thought I could do it, and once you’re given the confidence to do one thing, it gives you the confidence to go on to the next thing.”

Designed by architects Levitt Bernstein, the three-storey building sits on a previously disused corner site and features four one-bedroom apartments, a communal lounge and a sheltered garden. As minimising stressful situations and anxiety is particularly important for the residents, the design prioritised reducing the impact of noise through triple glazing, maximising light, and creating calm and private environments.

The scheme forms part of the Council’s Building for Lewisham programme, which is delivering new social homes across the borough for residents on the Council’s housing waiting list.

“It was wonderful to meet the new residents and hear how much they are enjoying the experience of living independently. Our Building for Lewisham programme is delivering new social homes across the borough and it is fantastic to see the transformative difference it makes for people like Zachary.

This project is a great example of collaborative working between the Council, local community groups and our housing association partners. I want to thank everybody involved for their hard work in delivering this scheme, which is beautifully designed and provides an incredible opportunity for some of our young adults with autism.”

“Moving in here has been a once in a life-time opportunity. I’ve always liked the idea of living alone and being independent, so this is a great opportunity of getting full control – for example being able to decide when and what I can eat. I get to do the shopping, to cook, to decide how everything looks.

“It was a really exciting opportunity because I wanted to prove to myself that I could do it – when I was diagnosed at a young age, the doctors said that I’d never able to live on my own, that I wouldn’t get far and would always need care. So part of this was proving them wrong as well.

The place also looks amazing. I wasn’t expecting it to be this big, to be this calm and quiet. The location is great, right by the train station, near all the shops and 20 minutes on the bus from my family. It really is an ideal situation.”

“After a year of such difficulty and bad news, it is simply marvellous to celebrate the very good news of the opening of Stanstead Road flats for autistic young adults. Our group – CLASH – Campaign in Lewisham for Autism Spectrum Housing – was formed in 2008, to find housing for our autistic sons and daughters, and today we are able to see the results of our efforts.

The housing project has been a model example of a collaborative effort, embraced by Lewisham Council, together with Birnbeck Housing Association, the various autism support organisations, and the parents and relatives of our young people. The construction of the Stanstead Road flats project has indeed been a genuine partnership, with an excellent outcome.”

Damien Egan, Mayor of Lewisham, with Zachary, one of the new residents, and Cllr Paul Bell, Cabinet Member for Housing and Planning.

Damien Egan, Mayor of Lewisham, and Cllr Paul Bell, Cabinet Member for Housing and Planning, at the completion ceremony for the new social housing scheme.

Zachary, one of the new residents, showed Damien Egan, Mayor of Lewisham, around his new home.